I'd take a photo of the Mississippi mud pie in my fridge but it's half-eaten and kind of gooey-looking, so you get the closest thing I could find: 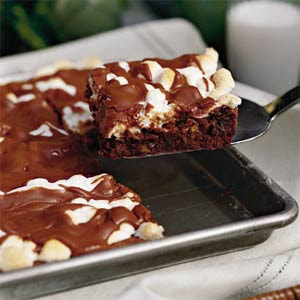 Just try looking for images of that stuff. No two seem to look alike. Wild.

So . . . how on earth does Mississippi mud pie relate to reading? Well . . . maybe not so much reading as life. It's been a messy couple of weeks for us. But, first, let's talk books.

I've fallen way behind on reviews and DNF posts, lately, and I love the way Brittanie regularly updates her blog with a list of books she's read but still needs to review, etc. Hopefully, she won't mind if I do something similar.

The Postmistress by Sarah Blake

Do not ask me why the spacing gods have messed with this section -- I just don't get it. I will write separate DNF posts on these three books, primarily because one is a tour book and if I write a post with an even number of book reviews, it'll throw off your inner balance. I wouldn't want to do that to you. No, no. Not me. Not ever.

Finished and need to review:

Wow, that's a big list. Very seldom do I fall more than 2 book reviews behind, so that kind of shows you how crazy my life has been, lately. I'll do my best to catch up. Remind me to work on brevity. That should help.

The Lunatic Express by Carl Hoffman - I am really enjoying this book! It's a travelogue written by a man who regularly works as a travel writer. After mulling what he could do to shake himself out a mid-life crisis, he decided to visit places where people use really dangerous modes of transportation because they have no choice in order to experience travel the way most of the world does it -- not for fun, but by necessity. I love to read about people doing things I'm too chicken to attempt, myself.

Dead End Gene Pool by Wendy Burden - I took this out of the sidebar because I'm focusing on The Lunatic Express and realized I don't need to have Dead-End Gene Pool finished till mid-May (oops, calendar faux pas). Whenever I get the chance, though, I will continue to pick it up and read a little. Another memoir, this time by a descendant of the Vanderbilts with a great sense of humor.

The Secret Lives of People in Love by Simon Van Booy - Yes, again! 4th time. I will tease you a bit, here. I picked up The Secret Lives of People in Love and began reading it after finishing a book that made me very, very angry. I knew Simon would help me recover, so to speak. I'll be reviewing the unnamed book, this week (don't want you to just see "angry" with "Bookfool" and a title, without an explanation included).

I've had to spend some time pondering how to review the unnamed book without jumping all over the author because I just don't think any author deserves the full force of my wrath -- and, I'm sure there are people who would enjoy reading the book. But, when I closed it, I was so upset that I couldn't think of a single positive thing to say. Former blogger Kookie has helped me to gain some perspective. The review will be generally negative but I'll mention who I think might enjoy it. Simon's writing, of course, has also helped me to calm down and see reason (and think of soothing things like rolling hills with sheep).

About to start reading:

And, why has Bookfool's life been like a Mississippi Mud Pie?

Everything in this blankety-blank house seems to be breaking. First, the dryer kicked the bucket -- abruptly, so that we had no warning and were left without a dryer for two weeks. Our gorgeous, cherry-red dryer arrived and we began washing . . . and the pipes started to back up. So, we've literally had to stand beside the washer and turn it off when the glug-glug noise begins and the water starts bubbling up. So far, husband has attempted three different pipe-clearing options. And, the washer has also been kind of acting funny so we're not sure but there may have to be a cherry-red washer in our future. What the heck. It's just money. Who needs to eat? Oh, and did I mention that we were in the process of repainting the kitchen to prepare for reflooring it (because the last flooring was a disaster) when the dryer sidelined us? And, the garbage disposal seems to have a broken tooth? [silent scream]

Enough about my life. I will try very diligently to remain focused, get some reviews and DNF posts written and not weigh you down with my whining for the rest of the week. Slap me down if I fail, please. Hope everyone has had a great weekend!!!! I mean it!!! Tell me what's wonderful in your life. I could use an upper.
Posted by Bookfool at 8:27 PM