Three DNF's and Why Bookfool Abandoned Them

Sometimes a book will grab you and sometimes the timing is just wrong or the book is not right for you; that's a fact of life for readers. I wouldn't want anyone to assume a book is awful and avoid it merely because Bookfool chose to set the book aside, hence the occasional DNF post. I'll tell you why these books didn't work for me, whether or not I'll give them a second chance and who I think might enjoy them.

Kailana and I were planning to buddy read Stormy Weather, but she misplaced her book and by the time she came to the conclusion that it was hopelessly lost (or at least lost enough that she wasn't going to catch up with me), I was about 100 pages into the book and vaguely bored.

is historical fiction set during the Great Depression. Elizabeth Stoddard and her three girls are forced into an itinerant lifestyle as husband Jack drifts from town to town working the oil wells, driving trucks, drinking and gambling. Wherever they go, Elizabeth does her best to make even the worst hovels livable and young Jeanine, the toughest of the three girls, makes sure her drunken father arrives home safely . . . until tragedy strikes.

Forced to move home to the family farm, Elizabeth and the girls find the land dried up and the house a wreck. They are already well acquainted with sacrifice and creative economy (that's one thing I loved -- Jeanine has a dress made from flour sacks . . . or maybe it's sugar sacks, but the point is that they're very creative about survival).

Shortly after their return to the farm, I stopped reading. There were more challenges ahead for the Stoddard girls as the dust storms had not yet arrived. Yes, I had trouble getting into the book; but, I managed to read about 100 pages and I think at another time I might really enjoy this story. In fact, just picking it up to remind myself what it's about, I felt a little tempted to open it back up; but, I've got three books going so I'll wait. I liked the characters, the setting and the storyline. I'm not sure why the book didn't grab me but I will definitely give it a second go and I'd recommend it especially to people who like more recent historical fiction and don't mind a bit of Texas dailect. I speak Texan just fine, so I had no problem with the dialogue.

Chosen: The Lost Diaries of Queen Esther by Ginger Garrett

As the title indicates, Chosen is written in diary format, complete with news articles to make it look as if the biblical Esther's diaries are the big news story of the decade, discovered and translated to great excitement. I love the story of Esther, a young Jewish woman who was chosen to marry a Persian king because of her beauty and risked her life to prevent genocide. So I was really looking forward to a fictional account of her life.

I only made it to page 58 and had to push myself to get that far. From the beginning, I felt uncomfortable with the the fake news articles and the style of Esther's diary entries, which is very modern. The author has chosen to portray Esther as a young girl in love with a boy named Cyrus and therefore it's part of her "Lost Loves" series; obviously, Esther won't end up with Cyrus. We already know she'll marry King Xerxes.

What did I expect?

Gosh, no idea. I guess I thought Esther (also known as Hadassah, her given Jewish name) would be a typical young girl, keeping house for her cousin, Mordecai, who kindly took her in after she was orphaned. I expected her to be hard-working and quietly faithful to the Jewish religion and then frightened when forced to become one of the king's wives. I presumed she would slowly grow in courage and strength with the help of Mordecai.

Instead, Esther worked at a booth in the market and had, I thought, a bit of modern sensibility. She bemoaned her place in society as a female, longed for Cyrus, stole kisses without worrying about the possibility of being publicly stoned. The story was just too far removed from my own personal image of Esther. I can't say other people would feel that way, so if you enjoy a tale told in diary format and don't mind a story from the Bible (which obviously must be heavily fictionalized to be expanded to novel length) told in a very modern style, this might be the book for you.

I do not plan to give it a second chance. Chosen simply didn't work for me. Had it been written in a slightly more formal style and without the frequent comments about being a girl in a man's world, I might have been okay with the book. The promotional info does call it a "contemporary account" but Chosen is much more modern than I anticipated.

Holly of Two Kids and Tired Book Reviews liked Chosen. See Holly's book review of Chosen, here. Thanks to Audra Jennings and B & B Media for my review copy. I will pass it on to my church family. 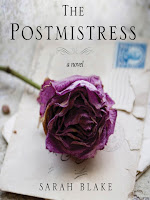 The Postmistress by Sarah Blake

WWII is one of my favorite time periods in both fiction and non-fiction reading. I was extremely excited about The Postmistress and jumped at a chance to review the book. I only made it to about page 18. From the beginning I disliked the writing, which is a bit dreamy and overwrought, in my humble opinion. But, honestly? I don't think I gave it a decent chance. A single sentence stopped me in my tracks:

The bus churtled past the stark lines of the shingled roofs triangling into the September evening.

Seriously, that's a crappy sentence. I was stumped, though. You never know -- a book that starts off badly can improve. Just in case, I asked for opinions on Twitter. The reviews were mixed. Several folks said they either couldn't finish or regretted wasting their time, but others loved The Postmistress and one gave me a link to her review. The quote she used for her review was the kind of "you were there" quote (with terrific action as bombs were falling) that I love.

I think WWII and, again, historical fiction fans who are fine with a more recent time period are the most likely to enjoy this book but it sounds like The Postmistress has gotten very polarized reviews. I'd advise those who are interested to flip through a copy at the store or library and read some passages to get an idea whether or not it's a good fit before buying. I am definitely going to give this book a second chance. If it still doesn't work for me, I won't say anything further, but if I enjoy it on the next try I will write a full review.

The other book I mentioned not finishing, in a recent post (Live Big!), is a FirstWild tour book and the preview chapter is scheduled for Friday. I'll write my DNF post and schedule it for the same day to coincide with the sneak peek post.

What else is new in the (very small, heavily rural, extremely green) city besides that lush, jungle look?

Fiona got her second round of shots, today, and she did very well. She's feeling fine, active as ever, but she did try to climb up over my shoulder and down my back to get away from that mean man who kept sticking her with needles. The vet said it's the feline leukemia shot that tends to really flatten some kitties and that was one of last week's shots. Wahoo for that!

On a personal level, we have had some interesting challenges within our family and we're still dealing with trouble with the water pipe backing up in the utility area. But, we're all feeling rather zen at the moment. Husband has removed a chunk of wall board (molded, ugh) and is trying one last method to clear the lines. If it doesn't work, I guess we'll go for a plumber or a roto-rooter guy. The washing machine does seem to be working, though. That's another wahoo.

What's up in your world?