Mini reviews - because I really don't feel much like writing (or anything else, for that matter)

The House with a Clock in its Walls by John Bellairs
Copyright 1973 (my edition: printed 1993)
Puffin Books - Children, ages 8 and up
179 pages
Kailana and I planned to buddy read this book, but we got our wires crossed and I read it two weeks before she did, then neither of us felt like we had that much to say about it, so The House with a Clock in its Walls seems like a good candidate for a quickie review. Recently orphaned, Lewis goes to live with his uncle Jonathan. He hears bumps in the night and becomes curious. Why is Uncle Jonathan walking around in his own house with a flashlight, tapping on the walls in the middle of the night?
When Lewis confronts his uncle, he finds that Jonathan is searching for the source of a ticking sound that can be heard within all of the walls of the house. There's a clock somewhere in the mansion -- a house that Uncle Jonathan bought after the deaths of the two wizards who used to live there. Both Jonathan and his neighbor, Mrs. Zimmerman, have special magical powers, as well. But, when chubby Lewis borrows one of Jonathan's magic books and casts a spell to keep from losing his only friend, he accidentally resurrects one of the evil wizards who used to live in his home. If they're to survive, the clock must be found and the evil stopped.
I think I would have really loved The House with a Clock in its Walls as a child but as an adult it struck me as just a little too far-fetched. One thing I did like was the fact that Uncle Jonathan is a nice guy. I think the evil relation thing has been overdone and it was a pleasant change to read about an orphan moving in with a kind uncle rather than a cruel one. I had Mrs. Zimmerman mentally cast as Maggie Smith, an actress I find tremendously likable even in her bitchiest roles, so obviously I also liked Mrs. Zimmerman. In general, I considered the book an average read. 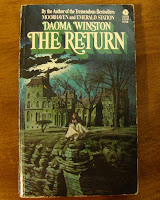 Gabriella Tysson leads a quiet life working at an insurance company. She's shy and friendless, having spent several years as caregiver to her dying mother. When Jessie from Human Resources comes up to chat with Gaby and invites her to lunch, Gaby's happy to find a new friend. After a few weeks, Jessie offers to host a party in honor of Gaby's upcoming 21st birthday and it's there that Gaby meets Benjamin Haley, a distant cousin she vaguely remembers from her childhood. It's love at first sight and Ben proposes almost immediately, encouraging Gaby to quit her job and rush off to the home she and her mother hurriedly left in the middle of the night after her father's funeral, 11 years ago.

Cornell House sits on the edge of the rocky California coast. Little has changed since she and her mother left, but a mystery remains. Why did her mother steal away in such a rush? Could the string of "accidents" before and after her arrival have anything to do with the sudden appearance of another distant cousin, William? After a mysterious death and several close calls, Gaby begins to unravel the mystery with the help of an elderly family friend. But, her 21st birthday is looming and her life is in danger. Can Gaby figure out who is trying to kill her before it's too late?
My mother bought The Return in the Seventies and I've read it too many times to count, from junior high onward. It's one of my comfort reads. Gaby is a bit of a dim-bulb heroine (it's almost immediately obvious that she should have trusted her mother's judgment and stayed away from Cornell House), but I still love the story and it will always remain on my good shelves. I've carried it around for my entire married life. The Return is suspenseful, if predictable, and there's a nice little romance on the side. I read it to clear my palate, so to speak, after this book left a bad taste in my mouth:

Rhymes with Witches by Lauren Myracle
Copyright 2006
Amulet Books - Young Adult/Paranormal
237 pages
Jane wants to be popular and the most popular girls in her high school are known as "the Bitches". Each year, one of them graduates and a new girl is recruited -- the group of four consists of one girl from each class year. Jane's stunned when one of the Bitches approaches her with an invitation and thrilled when she finds that she's been chosen as the new recruit. But, there's a catch. The Bitches use black magic to keep their popularity . . . and someone has to fall in popularity for another to rise. Each week, Jane must do something really bad to remain popular. And, her best friend is an easy target.
If this book didn't happen to be really short and I hadn't actually spent perfectly good money on it, I would have ditched it the moment Jane made the choice to hurt her closest friend. Rhymes with Witches is full of nasty characters, dark magic and bad, bad language. I think it's appalling that adults write and publish this kind of nonsense. That is, of course, merely my personal opinion. I just think our kids are exposed to enough yuck on television and at school; the language could have been tamed and the cruelty level was beyond tolerable.
Jane eventually makes the right decision but she hurts a lot of people before she does and when she finally chooses to save someone from a terrible prank, the black magic is turned against her. I can't recommend this book to anyone at all. It's definitely not for me.

I may do several combined posts in order to facilitate the "catching-up" process because I have fallen so far behind on book reviews. We'll see. I'm rather unpredictable, you know.

Recently walked into the house:

- A very exciting surprise arrival because I loved Lende's first book, If You Lived Here, I'd Know Your Name . . . and so did my mother; it was actually one of the last books I loaned her. (from Algonquin Books)

That's it. Nothing else wonderful is happening, but I'll let you know the moment excitement breaks out and the party begins.