Beneath the Thirteen Moons by Kathryne Kennedy 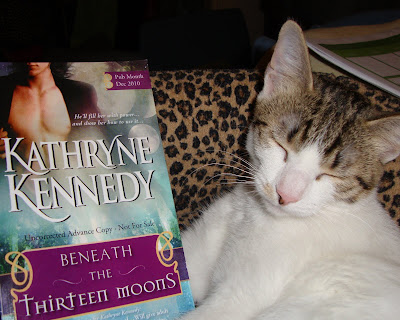 Mahri Zin is a swamp rat, a woman who makes her living alone, smuggling the coveted zabba root that can kill or infuse those who eat it with amazing power. She's strong, but she doesn't have the power to heal. When an illness hits her village, she has no choice but to kidnap a healer to save the people she loves. Last time she asked politely . . . and failed.
Korl Com'nder is a prince of the Sea Forest, a man who has lived in comfort and who would never stoop to associate with a lowly swamp rat. But, when he's accidentally kidnapped for his healing ability, he finds himself transfixed by one very independent woman with a power she's not supposed to use.
Will Korl willingly heal Mahri's people? And can Mahri overcome her unwillingness to love again?
What I loved about Beneath the Thirteen Moons:
Beneath the Thirteen Moons is a romantic fantasy that's very original. I thought Kathryne Kennedy's particular skill was in creating not only a unique world but a world with spectacularly beautiful scenery. There were at least four occasions during which I was totally blown away by Kennedy's imaginative use of flora, fauna and geology. She certainly knows how to set a sparkling scene.
What I disliked about Beneath the Thirteen Moons:
The story was a bit too long and repetitive and I was hoping for a little more plot than romance, but that's not to say the plot wasn't engaging -- and I knew it was a romance going into the book, so I have no reason to complain. There is definitely plenty of action in Beneath the Thirteen Moons. It's just a little too heavily weighted on the romantic side for my personal taste. And, yet, I liked it enough to keep going.
The bottom line:
A fascinating fantasy world with a uniquely beautiful setting and an interesting storyline, heavy on the romance and definitely at least PG-13 for some graphic sex. Particularly recommended for romance fans who like an unusual, original storyline with plenty of action or fantasy fans who don't mind a whole lot of romantic thoughts. A little repetitious and overlong, in my humble opinion, but romance fans might not agree with me on that.
Cover thoughts:
The cover fits the story in that it's romantic (man with bare chest) and is a fantasy that takes place on a planet with 13 moons (moons, fantasy look) but there's one small problem. The hero is blond. Oh, well. Close enough.
Big Brother is watching:
My thanks to Sourcebooks for the review copy! I can't think of anyone to send it to, off the top of my head, so the first American to beg for it wins. Any takers?
In other news:
I'm still on Christmas break but I neglected to get this book finished up and reviewed before taking off, so I'm just back temporarily to post the one review and I'll return in January! Happy Holidays!
©2010 Nancy Horner. All rights reserved. If you are reading this post at a site other than Bookfoolery and Babble, you are reading a stolen feed. Email bookfoolery@gmail.com for written permission to reproduce text or photos.
Posted by Bookfool at 11:19 PM