Why Our Decisions Don't Matter, ed. by Simon Van Booy 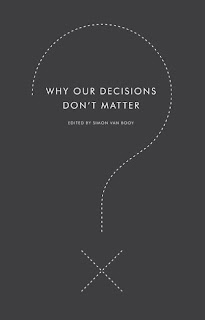 Remember: The things within our power are naturally at our disposal, free from any restraint or hindrance; but those things outside our power are weak, dependent or determined by the whims and actions of others. Remember, too, that if you think you have free rein over things that are naturally beyond your control, or if you attempt to adopt the affairs of others as your own, your pursuits will be thwarted and you will become a frustrated, anxious, and fault-finding person.

--from The Art of Living by Epictetus, quoted in Why Our Decisions Don't Matter, p. 18

Not a whit, we defy augury. There is special providence in the fall of a sparrow. If it be now, 'tis not to come; if it be not to come, it will be now; if it be not now, yet it will come--the readiness is all. Since no man of aught he leaves knows, what is't to leave betimes? Let be.

If we add the dream skepticism of A Midsummer Night's Dream to Hamlet's speculation about a dreaming death, then we reach the radical skeptical possibility of our being under the mistaken impression that we are living, perceiving beings. That is a highly vertiginous thought.

For Hamlet, our ignorance of the nature of death is what deters us from seeking it. It is our consciousness ("conscience") of our ignorance that prevents us opting for death as a way of the trials of life. This is a very grand form of despair--as if only a fool would not choose death if he could be assured that it was really the end of consciousness!

--from Shakespeare's Philosophy by Colin McGinn, quoted in Why Our Decisions Don't Matter, p. 78

"There are more things in heaven and earth, Horatio, than are dreamt of in our philosophy." By "philosophy" here we are to understand the full range of human knowledge, including science. The import of the statement is thus that the universe contains more than we can understand, or even than we can imagine. This is an expression of what philosophers call realism--the idea that reality is not limited by the possibilities of human knowledge. Knowledge has its limits, an on the other side of it are things unknown. It is not, then, that reality is determined by what we can know, understand, experience, or conceive; reality, in its intrinsic nature, is quite independent of our epistemological capacities. This is, indeed, the reason that skepticism is a genuine threat: our epistemological faculties can only be inadequate to discovering the world if the world itself is not constituted by those faculties. Knowledge can have limits only because there is something out there that it cannot encompass--facts it cannot reach.

--from Shakespeare's Philosophy by Colin McGinn, quoted in Why Our Decisions Don't Matter, p. 81

3.031 It used to be said that God could create everything, except what was contrary to the laws of logic. The truth is, we could not say of an "unlogical" world how it would look.

3.032. To present in language anything which "contradicts logic" is as impossible as in geometry to present by its coordinates a figure which contradicts the laws of space; or to give the coordinates of a point which does not exist.

--from Tractatus Logico-Philosophicus by Ludwig Wittgenstein, quoted in Why Our Decisions Don't Matter, p. 135

Why Our Decisions Don't Matter is one of three books in a philosophy series, each of which contains a selection of readings (including excerpts from fiction, non-fiction and poetry) as well as paintings relating to three different philosophical concepts. Why Our Decisions Don't Matter stunned and overwhelmed me so thoroughly that it has taken me at least a two months to get around to reviewing. I feel kind of awful about that. But, it's one of my most heavily Post-it filled books of the year and I find that the books that are in some way mind-bogglingly wonderful or surprising that are the most difficult to write about.

What is it about this particular book that I loved so much and that made it surprising to me? Here are a few thoughts:
I happened to read the Hamlet bits on the same day I found the description and image of a globular cluster at Discover's blog. 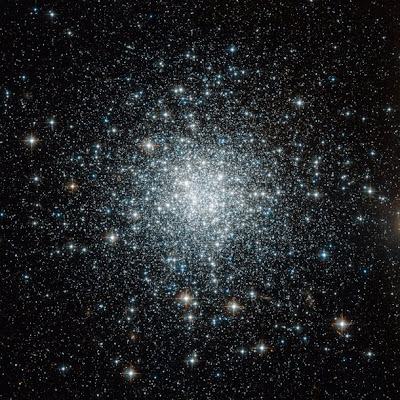 The larger 4000 x 4000 pixel image of this globular cluster is amazing--you really must click on that link and then scroll around and look at the details of the image. You can see a number of distant galaxies when you look at the magnified view. After reading Colin McGinn's explanation of Hamlet's confused meanderings and their meaning then viewing this particular photo, my immediate thought was, "How do we convince ourselves we know anything at all?"

The universe appears a lot more vast in this photo than it does just looking up at the sky and you can't help but wonder how many other places there are living, breathing creatures and end up feeling quite small, insignificant and awestruck. For my part, I can't imagine how anyone can explain that big, beautiful universe away. The idea of it alone makes my head spin.

But, back to the book. Why Our Decisions Don't Matter is an excellent collection of readings gathered by Simon Van Booy for the sake of introducing readers to the philosophy of the everyday decisions we make and how, in the grand scheme of things, they may seem critical at the moment we make them but end up being generally meaningless . . . but in a good way. Meaning, we're all going to die so do what you must to live while you can.

I love this series and Why Our Decisions Don't Matter is my personal favorite of the three philosophy books edited by Van Booy because what I got out of it was a kind of, "just go for it, now" feeling. I need to reread it, actually. It turned out to be the most thought-provoking of the trio, at least for me. There were a couple of rather dry, difficult readings, but I found most everything engaging, fascinating and well-chosen for the theme. I highly recommend this series and Why Our Decisions Don't Matter, in particular (if you must choose only one). I would love to have read this book with a group because I think the readings could make for some lively discussion.

My thanks to HarperCollins for sending me this series and to Simon for asking his publicist to ship them to me.

We finally got a Christmas tree! I know, kind of late in the ballgame. We were worried that the cats would pull over a real tree and slop water everywhere so we pondered just skipping the tree completely and making a small mini-tree display on the mantle. But, in the end, neither of us wanted to do without the pretty lights. So, we bought a small, narrow, pre-lit indoor-outdoor tree with a bit of weight in the pot to prevent it tipping in the wind. There's not a lot of wind indoors, but there are definitely some felines who like to put their weight on the edge of the pot. The cats have also both done some munching on the tree (they really seem to like the texture), but otherwise haven't really caused too much trouble. I'm sure there will be some cat-with-tree photos forthcoming.

I didn't get around to my "mad cleaning" over the weekend so today was the day. I managed to scrounge up a dozen more books to donate --wahoo!-- and we've almost completely shifted College Kiddo's possessions away from the living areas so our house is returning to normal. Kiddo is home for Christmas break and had to completely move out of his dorm room because his dorm is being demolished to make room for a larger dormitory that will take two years to build. At this point, we have no idea where he'll be living, next semester (which dorm, that is -- he'll definitely be in a dorm).

I have not managed to finish reading a single book, yet, this week. Hopefully, I'll get one finished tomorrow. I've been up way too late, recently, so I'm going to have to limit tonight's reading time. Bummer. How is your reading, these days? Is Christmas season interferring with the fun?