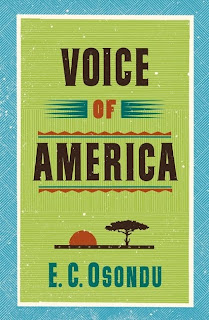 Voice of America by E. C. Osundu
Copyright 2010
HarperCollins - Fiction/Short Stories
215 pages
I am sure you remember Obi's daughter. She went to Italy to work as a prostitute after you left for America. Just last year she came back with lots of goodies for her parents and has even married a boy from a responsible family. They had their wedding in the church and the priest said that though her sins were like scarlet she has been washed clean by the blood of Jesus (after she made a huge donation for the repair of the church roof). She has gone on to bear a son and now nobody remembers that she was once a prostitute in Italy.
--from "A Letter from Home" in the Advanced Reader's Copy of Voice of America, p. 46. Some changes may have been made to the final print version.
Voice of America is a book of short stories written by a man who was born in Nigeria but now lives and teaches in the United States and, as such, the stories come from both sides of the coin -- some set in Africa, some in the United States -- each one about Africans: their fears, hopes, trials and joys, and what it's like to be a refugee, an immigrant or just a survivor of everyday life on either side of the ocean.
What I liked about this book:
I liked peeking into this strange, unique world. Africa can be both a beautiful and harrowing place to live but to many of the characters in Voice of America (and possibly in the minds of many Africans), the U.S. is a mysterious place of hope that is often quite different from the reality. Being an American and knowing what it's like to live in the U.S. can make it difficult to even begin to imagine the misconceptions others may have about our lifestyle, for better or worse; and, the stories in Voice of America place readers firmly in the shoes of Africans, giving American readers a glimpse into how we're seen by others.
The tales in Voice of America are candid, sometimes graphically gritty, at times humorous and always surprising. I found that I never knew what was going to happen, so I read this book rabidly. Many of the stories are harsh, but there were a couple that I found deeply touching and one or two were even uplifting. It's just as fascinating reading about immigrants to the U.S. and how they bring their customs with them (or find that it's difficult trying to escape those customs, even after relocating to another country) as it is reading stories about refugees dreaming of a new life.
What I disliked about this book:
I think the gritty, graphic nature of Voice of America is necessary because you can't fully understand the setting without the honesty, but sometimes the blunt wording made me cringe a bit. Also, a glossary would have been helpful as the author peppers his stories with African words or phrases without translating. Otherwise, the only thing I dislike is the title, which is also the name of one of the stories and very fitting if you're familiar with the radio show, "Voice of America" but perhaps a bit confusing from a marketing standpoint. If I were attempting to sell the book, I'd suggest a change of title to reflect the content a bit better -- something that says, "This book is about Africans, both in their home country and in the U.S. and their dreams for a better life."
A side note:
My favorite story is probably "Miracle Baby," the story of an immigrant who is unable to get pregnant and travels to her home country to see a miracle-making prophet at her mother-in-law's request. What happens is both enchanting and heart-breaking. There is another story that's loosely connected to "Miracle Baby," and I loved the crossover between those two stories, as well.
The bottom line:
Sometimes funny, often heartbreaking, Voice of America provides readers a revealing look at life as an African, whether at home in Africa or living in the United States. I really enjoyed Voice of America and recommend it particularly to readers who like stepping into the shoes of people who live in a different culture or that of immigrants facing the challenges of living in a new environment. Short stories aren't for everyone, but I like them if they're done well and by "done well" I mean "tell a complete story that doesn't leave you feeling short-changed in either characterization or development" and I think E. C. Osondu does short stories well. There's a little repetition, thematically, but I don't think that's necessarily a bad thing.
This book is rates at least PG-13 for occasional language, sexuality and violent images.
Cover thoughts:
I like the cover -- the colors, the simplicity -- but find that the obvious African theme combined with the title makes for a confusing clash that I think is likely to keep people from picking it up to flip through and/or purchase. If someone at Harper were to contact me for suggestions I'd say, "Change the title so it makes more sense and grabs people but don't alter the artwork."
My thanks to HarperCollins for the Advanced Reader's Copy, which will go into the next roving book box sent around by my little online book group.
©2010 Nancy Horner. All rights reserved. If you are reading this post at a site other than Bookfoolery and Babble, you are reading a stolen feed. Email bookfoolery@gmail.com for written permission to reproduce text or photos.
Posted by Bookfool at 9:05 PM