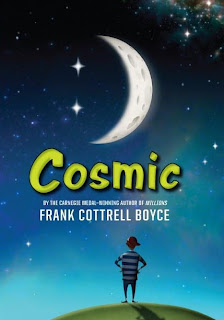 Liam is twelve but he looks thirty and that fact is a bit of a nuisance for him. "You should know better, big fellow like you," people are always saying. Why should he know better merely because he's big? he wonders. At any rate, he's caught between the world of the young and that of adults. And, when he's offered an opportunity to do something kids love but has to pretend to be an adult in order to do so, it's not so much of a stretch for Liam. He's used to pretending to be an adult with his young friend Florida. He's often pretended to be her father; Liam got in a good bit of trouble for that incident with the Porsche.

"Oh, dear." Dr. Drax sighed. "We girls are so complicated. Let's leave Dad to sort this out, shall we? I imagine Mr. Digby knows how to deal with his own daughter."
I don't know what made her imagine that. Florida was actually kicking me now and bawling,"You said we were going to a theme park!"
"We are. This is it."
"It's in the desert. Not even a normal desert. A Chinese desert. In China. You said it was down south."
"It is down south."
"I thought you meant London."
"But we were on a plane for hours. If you're on a plane for hours and hours, obviously you're going to go farther than London."
"I thought it was a slow plane."
A slow plane.

Pretending has gotten Liam in quite a bind, this time. Offered a chance on the "ultimate thrill ride", he has pretended to be the responsible adult in a group of children. The thrill ride? A trip to outer space. But, something went terribly wrong and now they're stuck in space with earth totally out of view.

I won't ruin the potential experience by sharing too much of what happens, but I will go ahead and tell you that this book was just about the most fun a kid can have. Even an old kid. Cosmic begins with Liam noting that he and his shipmates are lost in space and then you find that he's dictating his experience into his rather fancy cell phone. Then, it backtracks to how he ended up in space in the first place and most of the book details the adventure that led to the trip on the ultimate thrill ride and why he and the rest of the children were stuck in space.

There is so much to love about this book that I'm afraid I'm going to forget to mention half of it, but here are a few items of note:
"And why is it so sandy?" She seemed to think the Gobi Desert was my fault.
"Because the area in which we are standing was once the seabed of a great ocean that was exposed by a fall in the water level. The rocks and the mountains that were on the seabed have been broken down into sand by the wind over the last thousand million years." . . .
. . . "Well, Mr. Digby, you've done this before. What do you suggest we do now?"
I said, "Wait for the wind to die down?"
"You'll be waiting a long time," said Florida. "It's been blowing for a thousand million years so far, apparently."

Oh, how I loved this book. There is nothing I like better than a book that makes me laugh and if this book had been around when I was a youngster, I would have reread it a dozen times or more. Also, it's notable that both of my kids experienced the, "You should know better, big fellow like you," thing, as they both reached their full height around the same time as the protagonist. I had to reassure ticket-sellers at theaters and sellers of kids' meals that, yes, that giant critter was younger than he looked. In fact, when Kiddo was 4 years old, someone asked him what grade he was in and he proudly replied, "I'm in Miss Jackie's 4-year-old preschool class!" You should have seen the eyeballs pop.

Our little Isabel is wounded. Awwww. Apparently, she tried to stop her fall when she plummeted off the back of a chair, earlier today. She split open one of her little paw pads and bled and bled and bled all over the place. I've been instructed by Carol at the veterinary clinic to watch for infection or abcess because there's not a whole lot you can do about minor cat injuries. They lick off ointment and bite off bandages. We did lock the poor girl into the utility room with a super-fresh litterbox, some food and water and a couple of toys until she stopped bleeding, just for her safety (okay, yes, and because my husband was worried about the new carpet -- but really for her safety).

I have 10 pages to go before I finish reading Voice of America. And, we're under a tornado watch. Here I was, thinking we were beyond tornado weather because it's been so nice and cool! Serves me right for thinking. Sending warm thoughts to those of you who are experiencing the winter storm.

©2010 Nancy Horner. All rights reserved. If you are reading this post at a site other than Bookfoolery and Babble, you are reading a stolen feed. Email bookfoolery@gmail.com for written permission to reproduce text or photos.
Posted by Bookfool at 4:30 PM