The Winter Sea by Susanna Kearsley 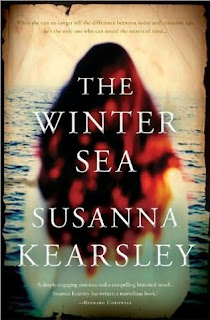 The Winter Sea by Susanna Kearsley
Copyright 2010, 2008
Sourcebooks Landmark - Historical fiction paired with a contemporary story
544 pages
'Ye cannot start a battle, lass, by thinking ye will lose it. Now come, let me show ye how it's played.' He was a soldier, and he taught the movements from a soldier's viewpoint, starting with the forward lines. 'These wee men here, the pawns, they're not allowed to make decisions. They can only put one foot before the other, marching in a straight line to the enemy, except when they attack. Then they follow the thrust of their sword arm, see, on the diagonal.' Moving his pawn against one of her own, he demonstrated. 'Now, the knights, at their backs, they can move that much quicker because they're on horseback and bolder . . . '
--from the uncorrected Advanced Reader's Edition of The Winter Sea, p. 354 (some changes may have been made to the final print version)
The Winter Sea tells the story of novelist Carrie McClelland. A successful published writer, Carrie is having difficulty writing her latest historical fiction, the tale of how a Jacobite fleet nearly succeeded at landing the exiled Scottish king, James Stewart, back in Scotland to reclaim his crown in 1708.
After visiting the area in Scotland where the invasion attempt took place, Carrie decides she's been writing from the wrong perspective and rents a small cottage near the ruins of Slains Castle. As she settles in and begins to write, she finds that whenever she checks her facts, the scenes she has already written turn out to be stunningly accurate. Eventually, she realizes that she is channeling the memories of her ancestor, the heroine of the book, Sophia. The story is told from both historical character and author perspectives, in alternating chapters.
As Carrie writes, she gets help from various Scots who live in the village nearby and falls in love with one of her landlord's sons. The cover of the book describes the historical portion as, "a tale of love and loyalty . . . and ultimate betrayal," a very apt description.
What I loved about The Winter Sea:
Everything. Okay, I know, that's not very specific. To be honest, I've had trouble putting a finger on what exactly it is about this book and this particular author's writing that so completely captured me. It's the kind of chunkster that you can sink your teeth into, though -- a thoroughly escapist read but also a dazzling adventure, not one but two romantic tales and one of my absolute favorite settings: Scotland.
I was truly impressed with the way Kearsley deftly moved from historical to contemporary storylines so that it was always clear which direction in time one was stepping. Also, there is a haunting air about The Winter Sea that reminds me of Daphne DuMaurier's writing and the historical description is emphatically believable. As is often done in more recent printings of historical fiction (this one is a reprint from the late 80's, I believe), the author describes what is real and where she has "taken liberties" with history. It appears that the research on this one was pretty meticulous and that may be one reason it's so believable.
What I disliked about The Winter Sea:
Absolutely nothing. Okay, that's not entirely true. There was one little quirk of Scottish historical speech that kind of drove me nuts -- the addition of "did" or some form of the word "do" before a verb, as in, "He did escape through the back door," rather than, "He escaped through the back door." Those are not sentences from the book, by the way. I don't know if they stuck a form of do/did/does before their verbs in the late 17th - early 18th century, but it sure was annoying. Other than that: nothing. Seriously. I loved this book.
I've already ordered a second book by Kearsley because I'm so enamored of her style that I want to see if I feel the same way about another of her titles.
The bottom line:
Beautiful, clear writing, a believable storyline, adventure and romance landed The Winter Sea on my list of favorites for 2010.
©2010 Nancy Horner. All rights reserved. If you are reading this post at a site other than Bookfoolery and Babble, you are reading a stolen feed. Email bookfoolery@gmail.com for written permission to reproduce text or photos.
Posted by Bookfool at 3:13 PM