Two Tickets to the Christmas Ball by Donita K. Paul 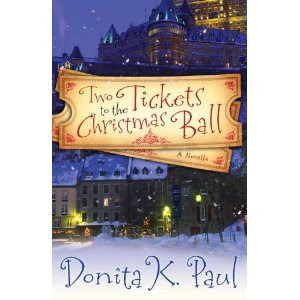 Cora Crowder is used to working during the holidays and spending her free time alone with her cat. A recently-converted Christian, she's just a little confused about Christmas season and what it should mean to her. Mostly, she just wants to get the season over with. Parties aren't her thing and she hates crowds so she does her shopping bit by bit.

When Cora goes to a bookstore in search of a book for her uncle, she's surprised to find the owners are more than a little odd and there's something just a little bit magical about the store. And, then she runs into her boss's boss.

Simon Derrick is serious and focused. In fact, he doesn't even seem all that friendly. He can't even remember Cora's last name. When Cora runs into him at Warner, Werner and Witzbotterdad's -- a very strange little bookstore on a street nobody seems to think exists -- he is every bit as unfriendly and distracted as expected. But, when both Cora and Simon find an invitation to the Wizard's Ball in their purchases, they are thrown together. Simon wants to take his sweet sister Sandy, who has Down's Syndrome, because he thinks it will make her happy; and, Cora wants to get rid of her ticket.

What neither knows is that the Wizard's Ball is a magical thing. People who go to the ball tend to end up married. Simon and Cora are both surprised to find that they really like each other when they're thrown together by various mishaps, an unexpected litter of kittens and their tickets to the ball. But, Cora really isn't sure she wants to go to a dance. Obviously, Simon wants to take his sister Sandy. Cora likes Sandy. Her plain-spoken thoughts about God and natural charm are endearing, but Cora doesn't want to feel like a third wheel. And, when Cora's wayward sister shows up and a very important item goes missing, it looks like Cora's not going to end up at the ball, whether she wants to or not.

What I liked about Two Tickets to the Christmas Ball:

The characters really are charming. Simon seems unfriendly, at first, but it quickly becomes apparent that he's a terrific guy who adores his family and has put his own life second to taking care of his mother, grandfather, great-aunt and sister. Cora is a wounded soul. Her large, extended family is a total disaster and as a new Christian she's more than a little torn about how she should feel about family and the holiday season. She has a lot of trouble summoning the Christmas spirit. Sandy is adorable and the rest of Simon's family is funny and sweet. You can't help but fall in love with the cast.

I was also quite fond of the touch of magic to the book -- especially what happens to Cora's sister in the end -- and I liked the general predictability of the story. There are plenty of surprises but you know how it's going to end, which I definitely appreciate in a seasonal romance. Although wizards and Christianity don't seem to go together, I like a touch of magic in a Christmas tale and the magical/wizard aspect didn't bother me a bit.

What I disliked about Two Tickets to the Christmas Ball:

There were some dull moments and occasionally a sentence or two that I had to reread a couple of times to understand -- never enough to convince me to put the book down, though. A lot happens considering how short the book is, so I found it very entertaining. The only thing I really disliked about the book was the ending. It's a romantic story and I wanted the romance all wrapped up in a pretty bow. I thought the book ended rather abruptly and a little too soon. But, I liked it enough to recommend it.

A sweet, romantic, slightly magical Christmas story. Two Tickets to the Christmas Ball had all the elements I really love in a Christmas story. Although it was a tiny bit flawed, I enjoyed it and recommend it to those who love a light-hearted and romantic Christmas read.
I received this book for free from WaterBrook Multnomah Publishing Group for this review.

I didn't keep track of books in/books out, last week because I'm an airhead. But, I know I donated about 15 books, swapped a few and sent 1 to a friend. A seemingly unconscionable number of ARCs and swap books seem to have landed in my mailbox or on my doorstep, though. As soon as I find my two camera battery chargers (both of which I've managed to misplace -- and both cameras are totally out of power), I'll take a picture of my recent arrivals.

In case you're wondering:

I reviewed one of Simon Van Booy's philosophy books and the other two have been in my sidebar under the "Reviews Forthcoming" header for-freaking-ever. Want to know why? It's because one of them is my most Post-it-filled book of the year and the other is equally awe-inspiring. In other words, there is just so much to say about them that I haven't figured out quite how to narrow my thoughts down to reasonable size.

But, here are some general thoughts . . . I thought Simon did a brilliant job of choosing readings (some of the paintings confuse me as to their purpose -- the readings are much more obvious), describing the authors and introducing their works. The readings and poetry are thought-provoking and would be awfully fun to read as a group and discuss, in my humble opinion.

Philosophy has always intimidated me and now I'm not so terrified. Some of the readings were definitely dull or over my head, but very, very few. I was kind of stunned, in that regard. The two remaining titles I need to review -- Why We Need Love and Why Our Decisions Don't Matter -- are going to be highly recommended if I can ever figure out how to write about them. Confidentially, I'd be happy writing a 10-page document rather than a couple of weenie little posts. I suppose that makes me a very serious nerd.

I'm behind on Christmas stuff (decorating, cards -- oops, haven't written a single one -- and shopping) and I'm in a cleaning mood, so the reading seems to be falling by the wayside a bit. Also . . . I've been in a movie-watching mood. Tonight: Inception. Tomorrow: A Single Man. Well, some weeks are like that. Maybe I'll finally catch up on that review backlog. I'm getting close. Is the holiday season getting in the way of your reading, at all?


©2010 Nancy Horner. All rights reserved. If you are reading this post at a site other than Bookfoolery and Babble, you are reading a stolen feed. Email bookfoolery@gmail.com for written permission to reproduce text or photos.
Posted by Bookfool at 11:35 PM