The Cardinal Rule by Cate Dermody 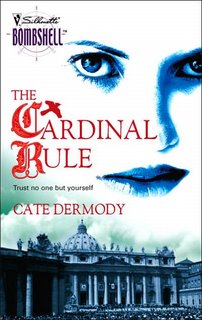 The Cardinal Rule was my first Silhouette Bombshell book. I have no idea what the guidelines for a Bombshell novel are, but this particular one was strictly a spy novel. Silhouette Bombshell is, of course, an imprint of Harlequin. So you might expect some sex or romance thrown in. There were moments that I thought might lead to something, but . . . nope. Just a lot of spy action, a little innuendo, and the occasional wishful thinking. That's good. I hate graphic sex scenes; I just do. I have nothing personal against romance, though, and I will happily skim such the parts I dislike if a book is entertaining. There are some very good writers who are sadly overlooked because they happen to write within the romance genre.

I've already managed to misplace this book. No, wait! It's by my left hand. Geez, some weeks. I didn't mark any quotes, so let's just cut to the chase.

The storyline in brief: Someone is creating an army of mechanized robots to replace humans in warfare. It's Alisha MacAleer's job to infiltrate the organization and determine whose side the brilliant scientist developing the robots is on and whether or not he presents a clear and present danger to the United States. The scientist is a former CIA agent *and* her boss's son. Alisha's handsome, Bond-like ex-lover-turned-mercenary adds complications by repeatedly showing up in the wrong places at the wrong times.

It was a fun book and I plan to read the next in the series. Not the kind of book that would ever keep me up late reading, I'd say (although, honestly, just don't trust me while I'm in this horrid mood) but it had some pretty enjoyable action and the writing is pretty good. I'm going to give it an average rating because it didn't grab me and hold on, but don't take that wrong. It's a fun read.