The Essential Lewis and Clark, Ed. by Landon Y. Jones 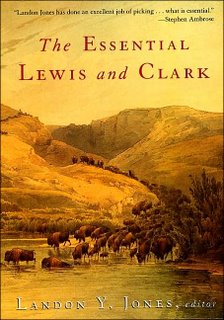 This evening the Indians entertained us with their dancing nearly all night. At 12 O'Ck I grew sleepy and retired to rest leaving the men to amuse themselves with the Indians. I observe no essential difference between the music and manner of dancing among this nation and those of the Missouri. I was several times awoke in the course of the night by their yells but was too much fortiegued to be deprived of a tolerable sound night's repose.

I'm going to remember the phrase "tolerable sound night's repose" because it sounds so much more romantic than "a decent night's sleep". Don't you love the wording?

As the name indicates, The Essential Lewis and Clark consists of severely edited journal entries that do not contain the two captains' extensive botanical, meteorological, and other scientific notes - which are probably superfluous to the casual reader - but instead consist of some very basic but fascinating and often hair-raising descriptions of their experiences. Lewis's capacity for understatement often had me smiling:

These bear are a most tremenduous animal. It seems that the hand of providence has been most wonderfully in our favor with rispect to them, or some of us would long since have fallen a sacrifice to their farosity.

No kidding. Lewis himself was chased into a river by a grizzly. Incidentally, Lewis quickly became my favorite journalist of the two, as he was the most poetically inclined. Clark tended to be a bit less of a romantic but I was most impressed with their respect for each other and some of the incredibly wise decisions they made before even setting out on their trek. For one thing, Lewis and Clark decided to share the responsibility of leadership equally and planned to always leave one leader with the main party if another needed to accompany some of the expedition members on a hunting trip (or for other reasons). This seemed to reassure their men, as I'm sure their devoted friendship and decisive leadership did. Lewis and Clark also chose to keep their entire expedition together rather than send back some of the party as originally planned, once the Missouri River branched off. I believe it was Lewis that decided that particular choice may have saved them from attack by unfriendly Indians, as they neared the end of their return trip.

One of my favorite of Lewis's journal entries describes his regret over the years he's spent in "indolence" as he turned 31 and his resolution to live "for mankind" in the future. As if he wasn't in the midst of a great service. But, given the many bears and hostile Indians they encountered, as well as their numerous illnesses and injuries, it's conceivable that he thought it likely he wouldn't make it home.

Lewis and Clark were definitely a couple of Real Men. I really had no idea just how many challenges this expedition faced, and I suppose you can blame either an inattentiveness on my part or a lousy early education for that. Hard to say. Either way, this little book (a mere 203 pages in length) is nicely edited down to an uncluttered and exciting set of journal entries. I would have sat up all night reading if I could have focused long enough. We're almost on an even keel, here, now that we've begun the third week of school, but I needed a few tolerable nights' sound repose and I haven't stayed up late reading. I'm sure I'll be back to normal, soon.

I'd say this is another 5/5. I would have stayed up if I could have, so it counts as if I did. Very exciting and fun stuff for the history buff (or the history stupid, such as myself).