The Secret History of the Pink Carnation by Lauren Willig 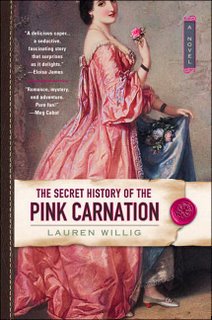 The name "Bookfool" has been roughly synonymous with the term "goofball" for the past few days, I must say. This was partly due to the fact that my computer went through a nasty little crashing episode when it started behaving badly and the hubster stuck in a diagnostic disc. This naturally made the computer promptly go berserk, the screen go blank, and Windows utterly refuse to come out of a coma. Fortunately, that episode seems to have passed. Fingers crossed. I was having a rough week, anyway, so a computer crash and fatigue were my two best excuses for shutting out the world to read.

I finished Lauren Willig's first novel, The Secret History of the Pink Carnation on Friday night, late (too late, really), while the computer was sputtering and the husband swearing mildly. I really should have been sleeping, but that's beside the point. The real point is probably that I reached that, "abandon or finish" stage that you sometimes arrive at in a book you're a bit iffy about. And, I have very mixed feelings about The Secret History, etc.

The book starts off with a modern Ph.D. candidate, Eloise, researching the story of the "Pink Carnation", the third in a [fictional] trio of spies that include the well-known Scarlet Pimpernel and the "Purple Gentian" - which I believe is also a Willig creation. I've read the additional material and promptly forgot that bit. Eloise's story, set in London, has a chick-lit tone, silly and light but with a definite ring of truth. And, of course, it turns out the author used her year in England and even her own Bayswater basement flat for a portion of the setting. That didn't surprise me, as it was obvious that Willig had experienced the crush of the London Underground. Moving right along . . .

When Eloise is allowed access to a chest full of papers, the story promptly reverts to the Napoleonic time period in which the story of the Pink Carnation takes place. Shortly after the switch in perspective, I considered ditching the book. The story is interesting, but it maintains a chick lit "feel" - light and silly - and, even worse, the language doesn't sound formal enough to fit the time period.

But, whatever. I decided I was going to continue and I did. Still dragging around page 100, I opted to become a total bum and do pretty much nothing but read. So, I finished it rather rapidly after three days of painfully slow progress. I never fell in love with the book, but I found that the story had some interesting twists and I was annoyed to find myself surprised by the identity of the Pink Carnation. Eloise's modern-day scenes occasional interrupt the Napoleonic storyline, but they seemed to be very well placed.

Apart from a weird mix of modern wit and iffy dialogue, historical accuracy that I can't question because the author is well-educated in history and I am not, and some pretty decent adventure and espionage, the book was (in my humble opinion) seriously marred by the romantic scenes. Of course, I don't like reading sex scenes, anyway, because I've always figured I have a decent enough imagination and don't really need such things spelled out. I'd much rather an author tippy-toed around sex. But, still . . . really. Yuck. Not my thing.

Fortunately, one ridiculous bit of sexual tension that went too far between hero and heroine had a hilarious ending. That helped make the scene tolerable. And, in the end, I was surprised to find that I really kind of wanted to read the next novel in the "series", in order to follow on with the characters. That honestly surprised me. Improbable dialogue notwithstanding, Willig did apparently hook me sufficiently, once I stopped doing everything else. My favorite quote:

"You shouldn't take heaven's name in vain, missy. You might want to go there, someday."

Using my new rating guide, I'd say this book is a 2.5/5 because the dialogue and sexual tension (or more graphic sex scenes) were pretty annoying. But, for entertainment value, it seems like I should rate it a bit higher. And, yet, I considered abandoning the book numerous times. See, I told you I had mixed feelings. I'm going to stick with my ratings system and just say I do think the book was plotted quite well and had some very fun and exciting moments. It's definitely not for those who like a more serious historical read and dislike chick lit.