Requiem for a T-Shirt and Hopelessly Idle Chatter 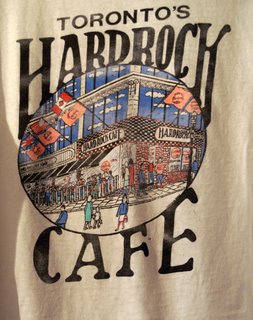 All together, now. Daaaaah. Okay, it was a lousy requiem but better than nothing. The pictured T-shirt was my absolute, utter favorite for 15 years. Sadly, it's got holes pretty much all over the place - all around the neckline and near the "F" in "CAFE", in particular. So, I wrote a one-note dirge (see "Daaaaah") and it has been officially retired. I loved this shirt.

I know that's stupid, but it was so cute - especially compared to the boring gold-and-brown Hard Rock Cafe shirts that everyone else had at the time (and it fit well). Do they still sell those? I guess Hard Rock is not the "in" thing, these days. Here's the funny part: Toronto's Hard Rock Cafe was a *dive* when I bought this shirt. It was full of biker dudes, fogged up with smoke and had little rickety tables with plastic covers. We looked at the menu, coughed a bit, rubbed our eyes, ditched the table, bought the T-shirt and left. Then, we went to Tulsa for a visit and Mom-in-law said, "You didn't get one for Karen?" So, when we were in Toronto we bought one for Karen (hubby's little sis, who was then a teenager). She wore it for about two years and gave it away. If I'd known, I would have said "I'll take it!" but that's life.

1. Dying to Get Away - I hopped in the car and zipped to the Big City: Jackson, MS. Because I had to return in time to fetch kiddo from school at 1:40 p.m. and I got a late start (it took a while for the coffee to crank me up), I was able to give myself exactly 20 minutes in Target (thank goodness I budgeted my time, since they had to do a price check) and 20 minutes in Hobby Lobby. But, hey, I had fun. I needed to get out. Retail therapy is truly a useful concept.

2. Can't Find It Anywhere - Last night I intended to look up something I read in Nabokov's Laughter in the Dark. For some reason, the book and I didn't manage to make it to the computer together and I *still* can't locate it.

3. "I looked everywhere" is impossible, at least in my house. It's pretty cluttery. We've got a big possession entropy problem. So, Nabokov is still missing and . . .

4. Well, I Had to Read Something at the Pool. Tucked a couple of books into my gigantic purse after picking up the kid, packed the cooler and dashed. It was threatening to rain, so I stayed for the entire swim session. I settled on Pay It Forward by Catherine Ryan Hyde. I like it, so far.

5. I also read a bit of Psychology Today, which I believe I may never read, again. A couple of months ago, they had a ridiculous article entitled, "Am I Beautiful?" about how everyone is beautiful inside and we've got to learn to live with our sucky exteriors. The entire article was illustrated with photos of . . . you've got it . . . beautiful people. And, as if the uglies needed a real kick in the gut, they interviewed the beauties and we got to hear how being pretty has benefitted them. Like, why do I want to know that? Geez.

Today's tidbit from that same magazine (this month's version): an article on people with Obsessive-Compulsive Disorder (aka neatniks) which included a comment from some authority who said that cluttery people - those who tend to acquire a great deal of stuff they don't need - are not successful in life, in general. Wow. Why not just walk up and stab a few thousand people for the joy of it? Should those of us who are cluttery just go ahead and jump off the bridge, now, since we're obviously not going to ever accomplish anything?

Just what someone going through a bit of depression needs to hear.

6. I spray-painted a shoebox for a project kiddo has to complete by Thursday (don't worry - he'll do the real work) and, this being the buggy South, managed to spray-paint a bug right onto the box. A little green bug. Or, he was till he landed while I was spraying and suddenly became white (and very dead). So sad.

Really, not a bad day. But, I could use a major caffeine infusion to get through the next couple of hours. And, then I can read and sleep. Boy, that sounds so fun. :) I love books. Too bad I'll never succeed in life because I own so many.