Where the Heck is My Nabokov?

It's been at least two days and I still can't find the Nabokov novel that I've misplaced! So weird. Or, maybe not. My husband thinks it's bizarre every time he misplaces his keys or cell phone, in spite of the fact that he does so on a regular basis, so maybe I should expect such things.

At any rate, I think this mysterious Nabokov disappearance may be a not-so-subtle hint that I need to do some serious housecleaning. And, I've been doing a pretty decent job since I decided to tell myself I'm in an *up* mood! Funny how remarkably well that little bit of self-delusion worked. That and, of course, encouragement from my bloggery pals. Thanks, ladies!! Now, if I could just tell myself there's an extra 24 hours crammed into each day and make time stretch accordingly, I'd be all set.

Thanks, also, to Nat for another HTML lesson. I'll work on turning Andi into a link, later on. But, first, I'm going to babble for a bit and then go read. Here's the most interesting stuff from my day:

1. Lizardfoolery - I had a bunch of errands to run, this morning, and my appetite is slow to wake up so I headed to Wal-Mart (yucko) on an empty stomach, whizzed over to Dillard's to hit the annual 75%-off shoe clearance, and then drove through McDonald's to get one of those yummo fruit and yogurt parfaits (oh, yes, I relax the "no food in Mom's car" rule a bit when it comes to urgent bags of fast food, these days). A little background info, here. I have a life-sized and realistically colored green plastic lizard of the kind that we have running around our yard, here - about 6" in length, I'd guess, including the tail, assuming a cat hasn't gnawed the tail off - on the clear plastic over my speedometer. It looks kind of like this guy, only green---------------> 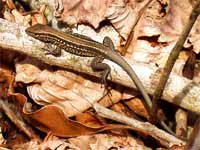 The little plastic lizard came from Chuck E. Cheese; I actually coerced my sweet child into spending his points on a stupid plastic lizard (the website I got the pic from says this one is a skink) and have had it in my car for 3 years. When I pulled up to the window to receive my yogurt, the girl at the window suppressed a shriek and pointed. I said, "Oh, it's okay. He's just plastic." She sighed, visibly relaxed in the shoulders and said, "Thank you." I'm not certain whether she was thanking me for telling her the lizard wasn't alive or for buying yogurt. Either way, it was a great moment.

2. Yee Haw! - We recently got an invitation to a wedding on hubby's side of the family. He couldn't really explain just who the bride is, but there's some kind of weird thing about my husband's cousin helping raise the child of a girlfriend he never married but with whom he has a son, or something like that, and . . . well, I don't even know if she's any relation to us but that's not the point. It says, I kid you not, that the wedding is to be held at a ranch in Texas, "Yee Haw!" Yes, that's on the invitation. When he read that part aloud, I thought he was kidding. Then, I picked up the invitation and read it, myself and got a really nice belly laugh. Gotta love it.

3. Cool Reading Hour - I've had very little time to read, but a couple nights ago I reached a tremendously fun part of my friend John's book, Rainbow's End, in which an entire series of mini-mysteries with one hilarious elderly snoop named Angela are all set back-to-back. I know those stories were sold to Woman's World because I remember reading a couple of them when they were originally published, but it was double the fun getting to read the whole series at once. (I'm really enjoying the book, John!!)

4. Swimfoolery -Today was kiddo's first high school swim meet. He actually had to swim one event solo, as it was a two-school meet and he was the only person in his heat for that particular event. Usually, competition (meaning a faster guy in the next lane) motivates him, but he did fantastic. His first meet and Will actually hit state qualification time on two out of four events. I'm so proud of him!! And, the weather was terrific. Blue skies, fluffy clouds, and a breeze! It was still in the lower 90's, but today was a massive improvement and we had fun. That's it. My day. Now, I'm going to go peek in some favorite blogs and read!!! Happy Thursday!!