How I Lost 5 Pounds in 6 Years by Tom Arnold 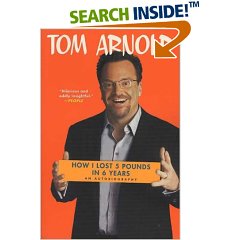 I like Tom Arnold as an actor and was in the mood for something light when I picked this book up. Normally, I avoid memoirs by famous people because I've found they tend to be either unbearably vain or just flat horrifying. Actors are, with few exceptions, people who crave attention; and, the same issues that lead them to desperately seek out an audience often also cause addictive behavior. You have to expect such things.

Apologies to my former-actor friend: I know you're one of the exceptions.

Tom Arnold is not an exception to the general rules (although I'd say he's less vain than most). He has a pretty horrifying childhood story to tell, involving poverty, abuse, neglect, abandonment and early addiction. The main difference is that he has a huge heart, desires little more than steady work and a solid family life, and his story is told with humor. He's a decent actor and a genuinely funny guy; and, I felt that he was pretty down-to-earth, as far as this type of memoir goes. We even decided to have a Tom Arnold weekend after I closed the book (although we only got as far as True Lies because it was just one of those weeks that required a good deal of weekend catch-up napping).

Admittedly, there was one point at which I came to understand one of the cover quotes:

"After reading Tom Arnold's most candid thoughts and feelings, I wanted to divorce him."
--Bill Maher

However, that point was a serious low point and Arnold pulled himself out of his rut, checked into rehab, tried diligently to work out his marital differences and eventually found a great wife (on the third try). His greatest desire is to have children and the book is written as if he were telling his life story to his own child. Last I heard, he and his wife were taking a break from trying to conceive after 5 in-vitro failures (as of late 2005, I believe); this book was copyrighted in 2002. I wish them the best of luck. He sounds like an okay guy. Just try to skim over the bit about that threesome and quietly dumping his then-wife from the trio to continue with the other female and you'll be fine, if star bios are your thing.