Promise Me by Harlan Coben 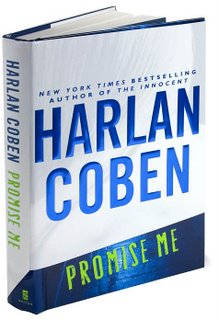 What a total Bookfoolish Bum I was, today! After whining about not finding the time to read yesterday, I pretty much did nothing *but*, all afternoon, in spite of a bang your head against the wall, pounding migraine. Of course, it was because of Harlan Coben's consummate skill at sucking a reader in and keeping her transfixed. With Coben's trademark combination of both suspense and humor in top form, this Bookfool couldn't put the darned book down for more than a few minutes at a time. And, most of those breaks were spent peeking at a snoring son who very nicely napped right till the book was closed and set aside.

Promise Me marks the return of Myron Bolitar after a lengthy break during which Coben switched to stand-alone suspense novels. And, what a whopping fine reappearance of a beloved cast of characters. Not only did Coben keep this reader guessing till the end (which has become more rare with every mystery or suspense I read - okay, I did figure out at least one critical detail but it wasn't enough to ruin the book), but his characters were also at their witty, fun-loving best.

From the cover: Myron Bolitar has known Aimee Biel since she was a little girl. Her mother was one of his best friends in high school. So when he overhears Aimee and her friend talking about getting in a car with a drunk driver, Myron's protective instinct kicks in. He asks the teenagers to call him if they're ever in a bind--no questions asked. His offer seems harmless enough, but even the best intentions can sometimes go horribly wrong.

A few days later a frantic Aimee calls him at 2 a.m. and asks him to pick her up at a deserted street corner in Midtown Manhattan. Myron does and then drops her off at what Aimee claims is a friend's house . . . but he doesn't see her go inside. Now Aimee is missing and Myron is in a critical situation. Can he find this vulnerable girl before her parents and the police turn their sights on him?

The cover blurb isn't entirely accurate, as the police take interest right at the outset and Myron has to do a little quick talking with the help of his friend, Win, to get himself out of a bind. But, nevermind. Until Penguin comes knocking at my door to beg me to write cover blurbs, we'll just have to live with the occasional slightly misleading blurb. The book was excellent and the pages flew. This one's a 5/5, a two thumbs up, rollercoaster ride. Go for it.

Next up: Down Came the Rain by Brooke Shields.