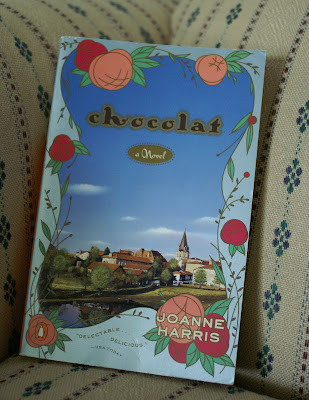 March has brought an end to the rain. The sky is raw now, a screeching blue between fast-moving clouds, and a sharpening wind has risen during the night, gusting in corners, rattling windows. The church bells ring wildly as if they too have caught a little of this sudden change. The weathervane turn-turns against the wheeling sky, its rusty voice rising shrilly.

Chocolat tells the story of Vianne Rocher and her daughter Anouk. A single mother and a drifter, Vianne arrives in Lansquanet-sous-Tannes during a carnival, drawn by the wind. She and her daughter open a chocolate shop in a former bakery and take up residence in the rooms above. Across from the chocolate shop, La Praline, is the village church, and Vianne's tempting shop angers the the local priest, Reynaud. How dare she tempt the villagers during the season of Lent? When Vianne decides to hold a chocolate carnival on Easter Sunday, Reynaud decides he must do his best to run her out of town. But, Vianne's shop and her touch of magic coax many of the locals to give in to happiness and their newfound strength may be too much for the father to fight.

I couldn't find an image of decent size, so I plunked my copy of Chocolat on our ugly old couch (we keep moving it closer and closer to our front door in the hope, I think, that one of us will suddenly invite a charity to haul it off) and photographed it. I just love that cover; I'd like to dive right into the photograph and walk the streets of France.

The book, though? Hmm, I don't know. This is another one I had mixed feelings about. Beautiful prose, achingly detailed descriptions that sometimes made me salivate (the candy, not the thought of Johnny Depp as Roux - okay, kidding), spirited and three-dimensional characters . . . there's a lot to love about Chocolat. I love Armande, the carefree woman about to turn 80 who chooses to defy her uptight daughter by wearing a bright red, silk slip and secretly meeting her grandson, Luc, in the shop. Guillaume is another lovely character, whose spirit rises with the help of Vianne and Armande after the loss of his beloved pet. Every character is believable and resonates, in some way, with a touch of familiarity; they're utterly believable.

What did I not like? Again, I'm not certain, but I'd say it might have to do with a feeling of negativity pulsing through the book - that toward organized religion. Vianne is a witch and this is reflected in the sachets she posts on the door frames, the way she forks her fingers to ward off evil. She's a good person and the priest is basically evil; he's the leader of a church for all the wrong reasons, justifies his actions regardless of how terrible they are and turns his personal vendetta into a church issue. There are plenty of pompous, self-righteous church leaders, no doubt; but it just seemed to me that the story was, in part, a castigation of Christianity and that didn't set well with me. They were both fighting their own personal demons; that I liked. The lengthy descriptions of various candies also were a bit tiresome. I'm impatient with an overload of detail, at least at this point in my life; that hasn't always been true.

I actually enjoyed the movie a bit more than the book, in many ways, as I thought the movie had a slightly lighter touch and more of a humorous spin. And, of course, it had Johnny Depp. I could only imagine him while reading the book and I had to keep mentally changing his hair color; red just doesn't suit him, in my mind. I can't remember if his hair is red in the movie, as it is in the book.

Since I liked the characters so much and thought Harris's prose was lovely, I feel compelled to give it an above-average rating and I will definitely read this author, again.

This is my 11th TBR book. So far, I've read the following from my stacks, this year:

11 down, 1 to go! Hope everyone's having a lovely weekend!

Bookfool, off for a nice soak in the tub
Posted by Bookfool at 10:00 PM