The Sound of Waves by Yukio Mishima 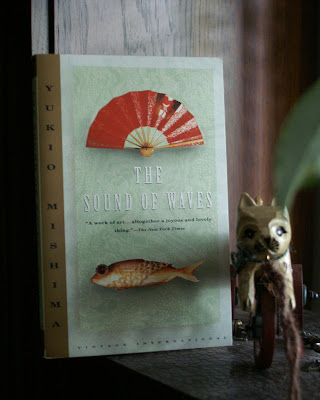 Shinji rose to his feet. He was ashamed of himself for the way he had been squatting on the deck until now, practically cowering. The wind came attacking out of the black reaches of the night, striking him full in the body, but to Shinji, accustomed to rough weather in a small fishing-boat, the heaving deck on which his feet were firmly planted was nothing but a stretch of earth that was frankly a bit out of sorts.
He stood listening.
The typhoon was directly above the boy's gallant head. It was as right for Shinji to be invited to a seat at this banquet of madness as to a quiet and natural afternoon nap.

I love the words "banquet of madness". The Sound of Waves is the love story of Shinji, a young fisherman whose income helps support his widowed mother and younger brother Hiroshi, and Hatsue, the daughter of the wealthiest man on their tiny island, Uta-jima.

***Warning: Possible spoiler. Skip this paragraph if you plan to read it, soon. ***

Shinji's fishing income is crucial because his father's death during the last war left the family impoverished; but, he's hard-working, happy, and pleased that his income allows his mother to spend a little less time diving for abalone. Hatsue is a young girl who was adopted out and has returned to the small island village after the death of her only brother, ostensibly as a replacement child. When Shinji first sees Hatsue, he's so overwhelmed by her beauty that he catches himself rudely staring at her and leaves, embarrassed. When Hatsue and Shinji eventually meet and speak, though, their affection is mutual. And when the rich and arrogant Yasuo, whom everyone believes to be Hatsue's suitor, helps spread a vicious rumor about them Shinji and Hatsue must endure both the cruel gossip and her father's enforced separation.

I don't know where I've seen the name "Mishima" discussed in the bloggy world, but it was because of seeing the name mentioned at various blogs that I looked specifically for a Mishima book when we stopped at Border's, brandishing one of those gift cards that are known to burn holes in the pockets of bibliophiles. It was way the heck up there on the top shelf; thank goodness for tall family members. I am so pleased that I found this book and grateful to whoever it is, out there, who mentioned Yukio Mishima! The Sound of Waves is a sweet, gentle romance. The writing alone is worth savoring, but I was particularly thrilled with the innocence of the two characters, the comradeship, easy forgiveness and kindness of the people on Shinji and Hatsue's tiny island home. It's just a lovely, lovely story; even while reading the book, I found myself repeatedly thinking, "I will want to read this one over and over, again."

Coming up . . . a return to Wahoo Wednesdays, an early blogging feature that I sort of forgot I used to do. I like thinking about positive things.