I don't give up on books very often, although I frequently set them aside and return to them. Crystal Line, however, appears to be one I'm willing to give up on. It's the third in a series and I haven't read the first two. Normally, I can enter a series in the middle or at the end without trouble. Crystal Line, however, doesn't stand on its own well. There are too many things that I've been trying to understand for 100 pages and I don't want to try to unravel the meaning, anymore. With 200 pages to go and seemingly little happening (although there's a lot of talk about crystal - I'm actually really tired of the word "crystal", at this point), I've decided to abandon the book. If I decide to pick it up, again, and hack through it I'll just post a review, later; but, I think that's unlikely. Instead, I may search for a different McCaffrey title because she's new to me and sci-fi-loving friends highly recommend her.

And, about that robot I mentioned in this morning's early post . . . The spouse travels almost every week, as I may have mentioned. Usually, he warns me well in advance and I'm not particularly pleasant about his travel because it's been going on for almost our entire married life (with the exception of our early married days, when we were still at Oklahoma State University). Sometimes, he'll just spring the news on me at the last minute, as in: "Oh, by the way, I'm leaving for Timbuktu, tomorrow." 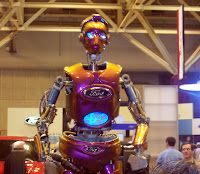 On Monday, I found out hubby was traveling via a completely different method: robotic phone call. When Delta called to confirm the spouse's first-class upgrade, he was home for lunch. I turned to him, as the robotic voice babbled in my ear, and told him the Delta robot was calling to inform me that he hadn't bothered to tell me he was flying somewhere and where are you going, you shameful husband? With a guilty grin, he told me he was leaving in the morning for Ft. Lauderdale, Florida. He has not heard the end of this. When hubby called home, yesterday, I answered the phone, "Delta robot. Your wife is unavailable; please leave a message." Yes, he laughed.

It's a good thing my husband and I like each other.

Off to read because the pollen is killing me and otherwise I'd just curl up and sleep off the sneezies . . .
Posted by Bookfool at 8:18 AM