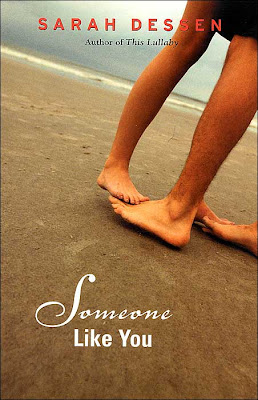 Someone Like You was another of those books that I didn't expect to read; it simply ended up being the right book at the right time. I found it while we were in Oxford, MS attending the state swim meet, which my youngster was participating in. While browsing in Off-Square Books, I came across Someone Like You and it looked like a terrific read. I love young adult (YA) books, in part because they tend to be excellent for breaking reading slumps and often address issues of importance from a unique (teenage) perspective. It's been quite a few years since I was a student and had to deal with all the stresses of assignments combined with parental and teacher authority and the wacky social dynamics of school. Being a young person with a circle of friends and unique challenges of the educational environment is a world all its own. But, as older folks with bills know, it was a simpler life in many ways and can be enjoyable to reflect back upon.

Today's issues are much the same as those we dealt with, but more complex. In Someone Like You, Halley Cooke has quite a few things going on in her life. Her best friend, Scarlett, calls her home from camp with the news that Scarlett's boyfriend, Michael, died in a motorcycle accident. She needs Halley's help to get through the funeral and the shock, in general, of losing Michael. Scarlett has a mother who needs to be mothered, herself; and, Scarlett is very grown-up for her age. But, her wall of strength has understandably collapsed. When Scarlett finds out she's expecting Michael's baby, Halley is there for her as she decides whether to keep the child, abort, or give it up for adoption.

Meanwhile, Halley must deal with a psychologist mother who doesn't want to let her make her own decisions and a radio-personality father who is somewhat embarrassing. They're busy people but when they show up, inevitably Halley gets in trouble. Although Halley doesn't set out to cause problems, she simply needs to push the boundaries in order to understand herself. Michael's best friend becomes a part of stretching her horizons when he takes interest in her. Macon Faulkner is a typical bad-boy type. When he makes it to school, he spends a good portion of his time in the counselor's office. When Macon begins to flirt with Halley, she's flattered. And, gradually, she begins to wonder if it's true love.

There are loads of relevant issues in Someone Like You: dealing with the hassles of a screwed-up school schedule, annoying classmates, first love, drinking and how it can alter judgment, whether or not to sleep with a boyfriend (whether he loves you or not), forgiveness, loss, and the sticky issue of pregnancy at 16. There are plenty of light and witty moments, but the book takes the characters and their issues seriously.

Again, there were no overwhelmingly wonderful passages (apart from a very fun scene in which Macon describes the Jedi Mind Trick he uses to get out of trouble), but I enjoyed the book and appreciated the fact that the author gave each character a strong individuality, a sense of humor, and an ability to make intelligent decisions. I can see why a friend who teaches has told me that her students gobble up Sarah Dessen's books.

Someone Like You and another of Sarah Dessen's books, That Summer, were combined to make the movie How to Deal. I was curious how screenwriters managed to combine two books with different characters and issues, so I watched the movie and then flipped through That Summer (which I currently have checked out from the library but have not begun to read). It's all rather fascinating. For purposes of movie-making, Scarlett's role was downplayed a bit and the bits taken from That Summer seemingly were designed to funnel the movie's theme to a single, streamlined question: Is there really any such thing as lasting love? I'll have to read That Summer in order to gain a full grasp of the combination of two stories.

I enjoyed Someone Like You. While in Oxford, I was so tired that I couldn't concentrate on any of the books I carried with me and Someone Like You sucked me right in. It's a smooth read with relevant issues and welcome moments of levity.

Email ThisBlogThis!Share to TwitterShare to FacebookShare to Pinterest
Labels: recommended, reviews, YA