That Summer by Sarah Dessen 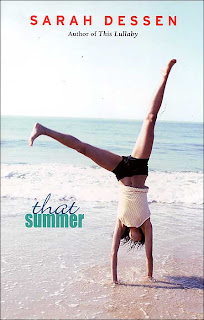 This has been an emotional day, so I'm going to keep the book review as short and sweet as possible (bearing in mind that brevity is not my strong suit). In fact, I made the mistake of returning this book to the library before writing the review, which effectively prevents me from looking up some pertinent info. Oopsy. I guess that's one of the pitfalls of borrowing rather than owning.

Actually, I don't have much to say about That Summer. I read the book mainly because I recently read and thoroughly enjoyed Someone Like You, also by Sarah Dessen (see my review here). I followed up the reading with a viewing of the movie How to Deal, which was based on a combination of characters and plotlines from That Summer and Someone Like You. The movie was surprisingly enjoyable, particularly considering the fact that it lumped two stories together. Halley of Someone Like You takes on the divorced mother and soon-to-be-wed sister of That Summer, as well as a different last name in How to Deal. I had to wonder why on earth anyone would choose to combine two novels in such a way.

Having read That Summer, I understand. That Summer is, in a word, weak. As I read the book, I repeatedly found myself wondering, "What's the point? Where on earth is she headed?" Because, frankly, nothing seemed to be happening. And, in the end, there was a bit of cliched (if there's a way to add an accent to this word, someone inform me) revelation about life but still . . . nothing really happened. The most interesting character was peripheral (Haven's sister's former boyfriend) and the summer referred to in the title was a memory that Haven had to learn to let go of. That's about it. It took me a full hundred pages to figure out that, yes, the author really was referring to a summer of several years past.

As a kindness to the author, I should mention that I seldom enjoy reading a second book by the same author within a short time-span of reading a first. I routinely latch onto similarities and become annoyed by them. For example, Sarah Dessen's male characters have a tendency to drive cars that make distinctive noises and hesitate as they pass the houses of their girlfriends. Had I spaced out the reading of the two books by a few months, I might not have noticed minor quirks that the author regurgitated in two separate novels. But, I desired to puzzle out the how and why of the decision to combine the two books into a movie and there you have it. Some of us are simply plagued with the distressing habit of zooming in on detail.

What I enjoyed about the book was the fact that the author has, in my humble opinion, the ability to crawl into the head of a teenager and treat the issues that are major and life-altering, at that particular time of life, with honesty. My experience was completely different from that of Halley or Haven, but I remember the feelings of confusion and angst, how even minor things seemed magnified, those distressing emotional swings that accompany the strange half-life between childhood and adulthood. I think that's Sarah Dessen's greatest strength.

Unfortunately, the book just didn't work for me and I wouldn't feel right recommending it because it was simply too flat and lifeless.

Many thanks to both Andi and Les for nominating this blog for a Thinking Blogger Award. I'll have to do some pondering (and blog-hopping - oh, torture me) in order to come up with five blogs that haven't already been tagged. Post forthcoming, but please be patient with me.

We're all stressed because Sunshine, our 12-year-old orange tabby furbaby is not well. She's 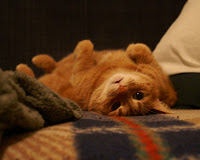 at the pet hospital for tests and hopefully we'll know more about what's going on and whether her current condition is treatable by morning. Sunshine (aka "Miss Shiny") is our puppy cat - extraordinarily companionable and smart. Till recently, she followed me from room to room and settled nearby, took nightly drinks from the bathtub and informed me if the water was too hot or too cold for her liking. She was an imp as a kitten but has mellowed to perfection with age. This past week, Sunshine's minor limp became more pronounced and she has been sluggish to the point of not bothering to eat. I feel much like I felt when I had a sick human baby . . . so helpless. I just love that cat.

Also thinking about . . . snow. It's hard to grasp the fact that elsewhere in the United States a blizzard was occurring while I was in the process of catching and releasing the first wayward red wasp of the season. Incidentally, my catch-and-release method has a two-fold origin:
1. I figure they really just want out or the wasps wouldn't gravitate toward windows and then buzz around the glass in frustration;
2. Wasps don't become quite as angry when you're not trying to bash them to death.

Off to indulge in my favorite healing remedy: a nice soak in a tub full of great-smelling stuff.
Posted by Bookfool at 9:14 PM