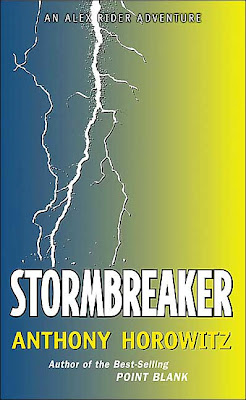 There's a strange, twisted reasoning behind the reading of this book. My son has read 5 of the 6 books in the Alex Rider series; and, he and the hubby bought me the movie as a gift (obviously, youngest may have had an ulterior motive). Youngest tried to convince me to read the books but I hesitated, a while back.

As to the movie, I have to admit that I was completely put off by the pretty boy who was chosen to play Alex Rider. When I first watched the movie, it was almost as if I was looking for things to criticize because I get so darn tired of all the gorgeous people. I want to see humans on-screen, not surgically altered or genetically perfect beings. Not that I don't like looking at good-looking men; but, skill and the ability to transform oneself into a character is more important to me than looking at another pretty face. However, I did enjoy the storyline and thought the movie was entertaining. I love lots of action.

Fast-forward to February and a marathon laundry-and-mini-series session. After watching The Forsyte Saga I was so impressed by two of the actors, Rupert Graves and Damien Lewis, that I looked up their bios to locate other productions in which I could view their work. I particularly desired to see Damien Lewis playing a character who was not so despicable as Soames Forsyte. As it turned out, Lewis is in Band of Brothers (which I'd like to see) and Stormbreaker (which, of course, I own). He played the Russian mercenary in Stormbreaker. Oh! I vaguely remembered the Russian. But, I didn't want to watch the movie, just to see Damien Lewis, if I could read the book first.

See, I told you it was all rather twisted.

Stormbreaker is a quick and adventurous young adult read, the story of a 14-year-old boy (Alex) whose uncle, Ian Rider, dies in a tragic accident. Or, so it seems. But, when Alex traces Uncle Ian's car to a wrecking service and sees the bullet holes, he realizes the police and the "bankers" Ian Rider worked for have been lying to him. Ian was, in fact, a spy for MI6 - Britain's top intelligence agency. When Alex is recruited to complete his uncle's mission, he finds himself in the same deadly situation as his uncle. Can he stop the wealthy man who is plotting lethal revenge upon his adopted country?

Okay, first of all, the book is far-fetched. But, what is the purpose of a novel in which a 14-year-old boy--trained in martial arts, climbing, diving, and foreign languages with the possible intent of following in his uncle's footsteps-- serves as hero, working undercover to foil a sinister plot? Obviously, action and entertainment is the objective. And, far-fetched or not, Anthony Horowitz knows how to pack in the action and humor. Personally, I have less trouble suspending disbelief when I know a book is designed with the intent to simply entertain and the author doesn't take himself too seriously. My impression was that Horowitz set out to write an action-packed book in which a teenage hero deals with some serious issues, shows his intelligence and capability, and triumphs over evil. Well, then, he succeeded.

I followed the book with a repeat of the movie and there were some differences, of course; but, I enjoyed knowing the background of the characters, recognizing the changes, and just being carried away in a silly but exciting story. Unfortunately, Damien Lewis had a fairly small part and, again, played a nasty man. Darn.

There was not a single passage which made me scramble to write down a page number or mark a quote; but, I'm rating the book high for entertainment value.

Coming up: Reviews of Someone Like You by Sarah Dessen and The Grizzly Maze by Nick Jans.

I'm floating between reads, at this point. Nothing seems to be grabbing me at all, so I'll thumb through some more books and hope I find the right one, tonight. We shall see.
Posted by Bookfool at 10:49 AM