No wonder we seem to be running out of living space. Here are some of my recent acquisitions - not all, mind you, but some. First, books sent by friends, found in the library sale corner and ordered from Paperback Swap: 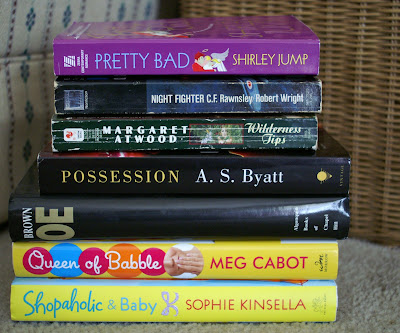 Possession, a library sale find, looks fresh off the shelf and Joe, by Mississippi author Larry Brown, is a first edition. God rest Larry Brown. Friend Barbara (also known as the "Book Fairy") sent the shopaholic book, Wilderness Tips by Margaret Atwood and Pretty Bad by Shirley Jump. Friend Tammy sent Queen of Babble. Night Fighter is just one of about 6 recent acquisitions from Paperback Swap (I may have to add another photo, later) and is yet another war memoir. I've really been enjoying the war memoirs.

Next, books purchased using gift cards or with actual currency: 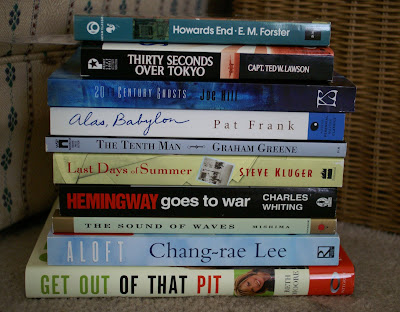 And, now that I look at this stack, I remember a few more. Sigh. I'm really that bad. Last Days of Summer and Hemingway Goes to War were purchased at Off-Square Books in Oxford, MS. Get Out of that Pit by Beth Moore came from Sam's Club. I got several books from Sam's, so I'll dig the camera out, again, later. Bad Bookfool, bad, bad!

Aloft by Chang-rae Lee, The Sound of Waves by Mishima, The Tenth Man by Graham Greene, Alas Babylon by Pat Frank, Howard's End by C. S. Forester and Thirty Seconds Over Tokyo by Capt. Ted W. Lawson (yes, another war memoir) were purchased with gift cards. 20th-Century Ghosts by Joe Hill was ordered from a small press in England.

Thanks to Nat for the reminder to post photographs (and take them in the first place)!!
Posted by Bookfool at 11:52 AM