To Hell and Back by Audie Murphy 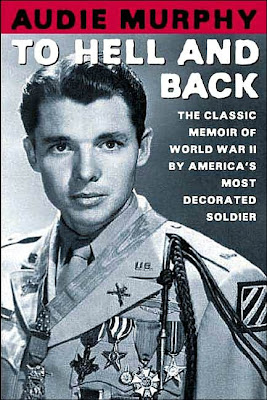 The heat of summer has passed, and a sharpness is in the air. It is October. When we pause on our marches, Novak gazes over the earth, sniffing strangely. He must be thinking of the season and harvest. He grew up on a farm in Poland and has a feeling for land.
In his squat, gnarled body, one can see the record of toil. His knotted muscles bulge through his clothes. The long, hairy arms dangle like an ape's; the hands are large and calloused. In his eyes is a strange, broken light which heightens the habitual sadness in his features.
We all like him. He is a top-notch soldier, seldom complaining and fearing little. He has a great love for coffee and cigarettes, of which he can never get enough. They must have been scarce items in his former days. . . . To him all Germans, dead, living, or wounded, fall into one class: "Sonsabeeches." He hates them personally and passionately.

Snuffy is drunk. Reeling through the mud, he sings, "Glory, glory, hallelujah, for I am marchin' on." His voice is about as musical as a crow's.
"That guy claims to've been a bootlegger," snorts Kerrigan. "Be like a rabbit running a lettuce market."

At dusk, we halt in a grove, with orders to dig in. Novak's prowling eyes discover a strawstack.
"We sleep tonight like a hotel," he says. "Soft like a goose feather."
"Yeah. Complete with running water."
"We fix that too. You wait."
As we load our arms with straw, voices sound on the opposite side of the stack, but we pay no attention to them. There's plenty of straw for us all.
"We make a roof too. Weave. I show you. We get dry, you betcha."
"We'd better get some sack-time in tonight. Tomorrow things are liable to start popping."
"Sure. We get it easy too long."
As we prepare to leave, two straw-laden figures round the stack.
"You build a cover too. Is easy. You weave," says Novak.
"Gott im Himmel."
"Sonsabeeches."
For an instant, the four of us stand stupidly sharing a mutual paralysis of surprise. Then, still clutching our straw, we take off.
If those two Germans ran any faster than we, they must have broken some track records.

A sergeant in the first platoon senses the predicament. If his men are isolated, they will likely be destroyed. He makes his decision quickly. Motioning his men to follow, he rises and with a submachine gun charges head-on toward one of the enemy positions two hundred yards away.
On the flat, coverless terrain, his body is a perfect target. A blast of automatic fire knocks him down. He springs to his feet with a bleeding shoulder and continues his charge. The guns rattle. Again he goes down.
Fascinated, we watch as he gets up for the third time and dashes straight into the enemy fire. The Germans throw everything they have at him. He falls to the earth; and when he again pulls himself to his feet, we see that his right arm is shattered. But wedging his gun in his left armpit, he continues firing and staggers forward. Ten horrified Germans throw down their guns and yell, "Kamerad."
That is all I see. But later I learn that the sergeant, ignoring the pleas of his men to get under cover and wait for medical attention, charged the second enemy strongpoint. By sheer guts, he advanced sixty yards before being stopped by a final concentration of enemy fire. He reeled, then tottered forward another few yards before falling.
Inspired by his valor and half-insane with rage, his men took over, stormed the kraut emplacement, and captured it. When they returned to their leader, he was dead.
This was how Lutsky, the sergeant, helped buy the freedom that we cherish and abuse."

The Germans turn mortar fire upon the beach. Our men leave the brush and race across the meadows to the vineyards. A shell hits a barn; and from it emerges a Frenchman leading a frightened cow by a rope. A second shell lands in the area. The bellowing cow jumps and starts running, dragging the Frenchman behind her.
"Put a saddle on her," shouts a soldier.
"Give her a flying tackle," another advises.
"Milk her on the run," yells a third.

To Hell and Back by Audie Murphy is subtitled "The classic memoir of World War II by America's most decorated soldier." You would never know Murphy was so heavily decorated by reading the book, though (apart from its obvious cover photo), and after perusing various websites I understand why. Audie Murphy was notorious not only for bravery during his time as a U.S. Army infantryman on the front lines in Africa, Italy, and France, but also for his modesty. Wikipedia has an excellent bio of Audie Murphy. Careful reading that bio if you plan to read the book, though, as it might spoil a few details.

As to the book itself, To Hell and Back is utterly amazing. From the quotes above, you can see that Murphy described the people and events in the manner of a seasoned raconteur. As in First Light, the story of a British RAF officer that I reviewed here, the entire book is told in a way that makes the reader feel like s/he was there. And, yet, the circumstances - the baking heat and freezing cold, shells and tracer bullets flying overhead whilst dug into a foxhole that quickly turned to mud (often pinned down for days, waiting for reinforcements), hunger, fear, thirst, endless days and nights of attacking the enemy and then not being able to sleep for the noise of the falling shells, the sights of death and maiming - were so extreme that one can't help but sit back and look around. What a nice warm house and a full stomach I had while reading this book. How incredibly quiet it was, with the pleasant hum of electricity and the only annoyance a three-legged neighborhood dog that seemingly never stops barking. I couldn't help but think about a dog's barking in comparison with the sound of bombs falling all around.

Because Audie Murphy described the people in the 3rd Infantry Division --their conversations, the often-morbid humor and individual quirks, their plans for the future--the reader comes to know each character so well that as they slowly die off (because he was on the front lines, almost nobody he knew for long survived), their losses become almost personal. I grew to love the men he served with and to cringe or even wipe away tears when favorites died.

Murphy's various heroic acts were described without skimping on true emotion but devoid of any hint of arrogance. When he was faced with danger, he was afraid and admitted it. But, he desired to fight to defend his country and, as he got to know his fellow soldiers, couldn't bear to leave his own men. Several times, he was knocked down by attacks of malaria and simply kept going until he collapsed. In a land where people often come close to knocking you off the road with their monstrous SUVs while talking on cell phones, it's hard to believe such a man ever existed. " . . . the freedom that we cherish and abuse." It's worth pondering. Apart from the fact that this book would probably be banned in schools due to descriptions of what some of the men did during the extremely rare days of leave time (involving women and STDs), the book should be required reading, in my humble opinion.

To Hell and Back is an exceptional story of courage, common sense, wit, survival, and comradeship. This one goes on the good shelves. Highly recommended.