Between the Storms and Reading Aussie Books on a Mississippi Sofa

I'm sure y'all have just been aching to see this entry. And, you'll think me doubly crazy when you finish, but . . . what the heck.

So, Bookfool (uh-oh, she's talking in third person; that can't be good) was cleaning the bathroom while the husband was (once again) out of town. While packing for Australia, the poor fellow was a little frantic, having never traveled quite as far as the other hemisphere. He had three or four different bags full of toiletries (he gets stranded quite a bit, and occasionally an airline will give him a small bag of amenities), all of which he tossed this way and that while filling up the usual toiletry kit. He asked me to dig up various items, sent his secretary on a lark or two to fetch sunscreen and snake-bite kits, etc., and basically buried the bathroom counter in such a frightening mess that it took a couple weeks for me to just get up the courage to attack it all.

And, what did I find? Bottles and bottles and bottles of hotel shampoo, mouthwash, conditioner, lotion, body gel . . . shoot, even a few tiny sewing kits and some miniature emery boards. I set some aside to take to the rescue mission and then lined up the rest and thought . . . huh. You could put these things in a triangle in the hallway and roll something down the hall . . . voila! Cheap bowling! Instead, the sun came out between storms. Ha! Outdoor time! I hauled them outside to the driveway. 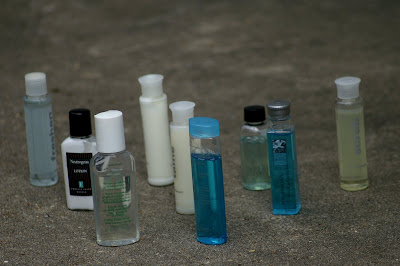 I didn't think it would be very interesting to use a boring old round ball, although I've got a nice bag of tennis balls in the trunk of my car. And, it occurred to me that - since the pears taste horrendous - there had to be some use for that revolting, flavor-free fruit that's about to litter our driveway (besides feeding the local insect life). So, I plucked a pear off the tree and started bowling with my left hand while snapping photos with my right - not an easy task. Pears are interesting, of course, because they're not round and wobble all over the place. So most of the time . . . . 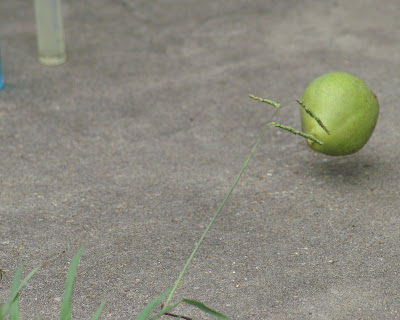 nowhere near. That pear was all over the place. Meanwhile, you can imagine I was keeping a sharp eye out and an ear tuned for traffic because I'm pretty sure the deputies would be really concerned if they saw such a sight. Not to mention the neighbors. Just before the postman drove down the hill (very quietly, I might add), I managed this shot: 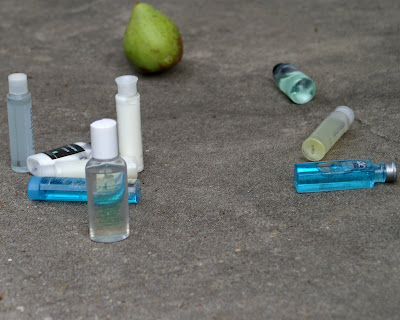 Wheee! The postman did catch me playing; he thought it was awfully funny. And, then the clouds started to look ominous and the rumbling grew, so I gathered my little bottles and went back inside to unplug the electronics.

I whipped up a cup of coffee (microwaved Viennese Chocolate Cafe - admittedly, I'm not a serious coffee drinker) before unplugging the microwave, pulled out While I Live - the first of The Ellie Chronicles by Australian young-adult author John Marsden - and set it on the couch. While I Live is one of the books the spouse kindly dragged back from Down Under.

Having read Marsden's fabulous Tomorrow When the War Began series, I've long since purchased an Australian English dictionary. I know better than to try to tackle this stuff on my own. So, I had my Dinkum Dictionary, my perfectly color-coordinated bookmark and a great Australian book to dig into: 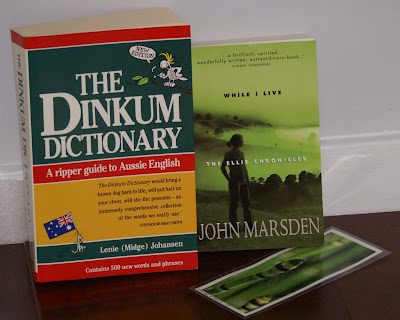 Almost ready. All that remained was to break into the Aussie junk food to complete the mood. Poppet helped. 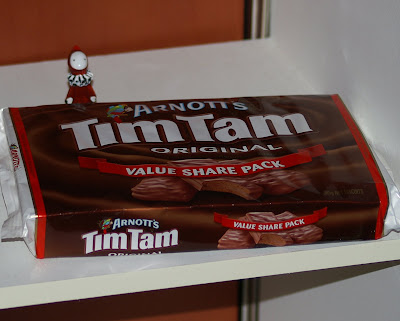 Thank goodness the husband didn't bring back Weetabix or Vegemite. I'm terrified of Vegemite; chocolate, I can handle. Thanks to the humidity, the air conditioner was cranking away like crazy and the chocolate melted in my mouth, not on my hands - because it certainly wouldn't do to have chocolate tracks marching through a perfectly lovely Australian book that safely traveled around the globe, now, would it?

So, now you know how to entertain yourself between storms if you have a traveling husband and some wobbly bad fruit, plus how best to read an Australian book while sitting on a couch in Mississippi. I live to keep you informed.

Incidentally, I did finish the book and will review it as soon as possible, probably between storms, tomorrow or Thursday. We've had thunderstorms almost daily for three weeks, now. It's very humid out there.

Today . . . youngster and I zipped over to Clinton to see Live Free or Die (thumbs up - huge body count, as usual, but I thought Justin Long was particularly fabulous as the nerdy sidekick). As we waited at a stoplight, a young gal turned left, arcing in front of us. Her left hand was dangling out the window, flicking cigarette ashes onto the pavement. With her right hand, she had a cell phone pressed to her ear. What I want to know is, how the heck did she manage to turn a steering wheel with both hands occupied? She wasn't leaning forward, so it wasn't an elbow thing. Could this, at last, be the alien invasion we've been waiting for since the 1950s? Because, frankly, I just can't figure out how anyone could turn left without sprouting an extra set of arms.

Yes, I really do think that way. I'd better go read while the power isn't flickering. Hope everyone is having a peachy week!
Posted by Bookfool at 6:38 PM