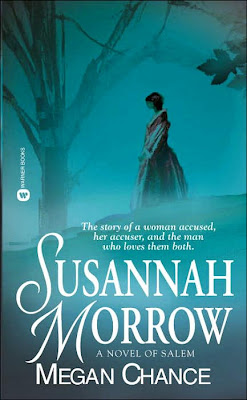 I went into the reading of Susannah Morrow knowing almost nothing about Salem Village, apart from the fact that what began as strange situation developed into a hysteria that ended in the deaths of many people accused of witchcraft. This particular story tells the tale of Susannah Morrow, a fictional composite of several of the accused. Susannah arrives in Salem Village from London as her sister, Judith, is struggling with the birth of a daughter. Judith dies shortly after the baby’s birth and Susannah takes over what would be considered the “woman’s place” in her sister’s household: cooking, scrubbing, taking care of the children. But the eldest of the children, Charity, harbors the secret of a “sin” that her mother helped her to hide and she fears that her mother’s part in the deception will keep Judith from heaven. As a result, Charity begins to hallucinate and develops an animosity towards Susannah that leads to horrible consequences.

The book does an excellent job of explaining what exactly happened, that a group of girls apparently got together and pretended to be tormented by various specters of women whom they accused of witchcraft. While some of the characters were fictional, including the title character and the family she lived with, the reality is apparently that what began as a horrible prank led to hysteria, numerous arrests, the deaths of many innocent people, poverty for a large number of village families, and the near-collapse of a small society.

Susannah Morrow is a pretty good book that didn't really thrill me. I have to admit that I tend to dislike anything that is dark or gothic in tone and I quickly reached the point that I really just wanted to get the book over with. I did, however, like the ending and the book was written with the kind of flow that makes it easy to read quickly.

I think what I really found uncomfortable about the book was the way each character seemed to twist his or her own belief in God, faith, and the scriptures to fit what they wanted to believe was happening around them. It may be reality that humans do so, but it made for annoying reading. It can be looked at another way, of course, as a fascinating examination of the horror that can happen when people are swayed by the beliefs of those around them. And, it certainly is bizarre and intriguing, the idea that a group of young girls were the root of such a huge frenzy, all because they played pretend to cause trouble for a few women they didn’t like. I’d definitely like to read some nonfiction to learn a bit more. However, the author mentioned that most of the girls who made the accusations disappeared from records after the frenzy died down. Still, it appears there is quite a bit of information to be found. If anyone can recommend a good, accessible book about Salem, please share!

3.5/5 - good flow, a little too dark for my taste (not that I expected sweetness and light in a story about that particular event but, you know . . . )

I'm going to call this a book for the Armchair Traveler Challenge because I just got to travel to Salem, Massachusetts (a place I've never visited in real life). Cool. I'm having fun traveling.

I've got some housework that can't stand to be put off any longer, so I'm going to delay the Chunkster drawing until Monday, if that's okay. Is that okay? Pardon me if I go quiet for a few days.

Also . . . three people have chosen me for a "Rockin' Blogger Award". Yikes. I guess I put that one off too long. Okay, I'll do a post on that when I have a minute, also. Thanks to all who think my blog rocks. Right back at ya. :)

Bookfool, Rockin' Beneath the Laundry Mountain
Posted by Bookfool at 6:09 PM