While I Live by John Marsden (Bk 1, The Ellie Chronicles) 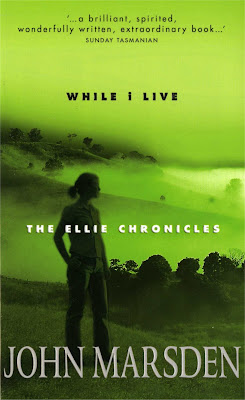 Homer and the Anglican priest from Wirrawee sat down with me and told me we had to work out the details of the funerals. I said I couldn't do it but when they got up to go I changed my mind. I realised that if I didn't do it, they would. And, I knew I couldn't live with myself if someone else made the arrangements . . .

So that evening I found it quite therapeutic to sit down and write out what I wanted. Father Berryman had left a bunch of poems and prayer, and there were a few that I liked. One of them started

Everything slips away. The river goes to the ocean
And joins that great mystery.
Now I too. You cannot hold me,
Any more than you can hold water. Let me go . . .

The trouble was that although I liked this one I didn't want to listen to it. Letting them go? I ached for them, hungered for them. My bones were sore with the pain of their not being here. I wanted to grip them to me.

Dad always said there were three types of workers. The ones who stood there saying 'Is there anything I can do?', and did nothing. Most of our city guests were like that. The ones who said 'Tell me what you want done and I'll do it', and did. Most of our workers over the years had been like that. And the ones who didn't say anything but were always a jump or two ahead of you. When you were changing a flat tyre and you took the old one off and turned to pick up the new one they'd already have it in their hands, and they'd move in and put it on from your left while you were still turning round to the right.

Ellie Linton is the protagonist and narrator in Australian young-adult author John Marsden's 7-book Tomorrow, When the War Began series. I found a copy of Tomorrow, When the War Began in the remaindered-book stock at the bookstore where I used to work, carried it up to the register to read, and could hardly bear closing the book long enough to buy the copy, lock up the store and drive home. The entire series was that way for me, but it was over a year before I managed to get the second and third books and it took several more years to acquire the rest. Even though I'm not a big fan of series books, it was hard to close that last book and say goodbye to Ellie. Each of the books is gripping, full of tense action scenes and loaded with emotion as she and her friends do their part to fight the unknown enemy that has invaded Australia. Ellie's resourcefulness alone is amazing.

When I heard that Marsden had begun a new series called The Ellie Chronicles, I knew I would want to get hold of them, some day. It's a good thing I'm patient because it's not easy getting those Australian books. I finally managed to get my husband to bring the first two home in a suitcase. Big yippee noises.

In While I Live, the war has ended. Australia has been divided and the line between the new Australia and occupied territory is not far from Ellie's home. The family farmland has been divied up because many Australians are now having to share less land. The family is slowly recovering, building up their livestock and trying to make a go of farming, again. When Ellie, her friend Homer and adopted brother Gavin are on a hill above the farm and hear gunshots coming from the Linton home, they run back to the farm as fast as they can. But, they're too late. I don't think it's giving away anything to say that Ellie's finds her parents dead because it happens within the first few pages of the book and the entire series must undoubtedly be based on her struggles without them.

Living without her parents is, according to Ellie, a bigger challenge than she ever faced during the war. She must not only deal with her grief, but also must take over the running of the farm and the care of Gavin. Nobody knows who killed her parents, but there is evidence that soldiers from the other side are crossing into Australian territory and the news carries vague stories about a renegade organization called Liberation, a group of people who have taken it into their own hands to rescue kidnapped and imprisoned Australians the governments of both sides will not acknowledge. Ellie suspects that she may know a few Liberation members. While trying to find out, she has some major battles to deal with on the home front.

Can Ellie save the farm? Will she find out who works for Liberation? What's happening along the border? Who will become her guardian?

Oh, so many questions. While I found that Ellie's struggles on the farm were often sleep-inducing, I love the character and knew that eventually things would pick up. There had to be some action in there, somewhere. Ellie is too resourceful to just run a farm (difficult as that may be) and not take interest in doing her part if there's any chance she can, say, blow something up to save a life. And, indeed, there is some taut suspense and action.

Overall, though, the book felt mostly like set-up for the new series and it took about 150 pages to really get going. It's an emotional book, and for good reason. Although I found it a bit slow, I was impressed as always by Marsden's ability to get into the heart and mind of a teenager - this time one dealing with loss.

If I were to complain about Marsden's books at all, it would have to do with the fact that nothing - absolutely nothing - is taboo. The violence is often graphic, there are sometimes vivid se* scenes . . . really, you name it. In this particular book, I thought he went over the top with a scene in which Ellie rhapsodized about her parents' naked bodies. Huh? Where did that come from? I would rate them family-unfriendly, myself. But I think that lack of inhibition is a part of what must make teenagers love his books. All the books with Ellie as heroine are written in first person. They're her thoughts and experiences; he never steps away from Ellie. And, teenagers don't censor their own thoughts. So, from that perspective they make total sense. Well, except for that bit about naked parents.

In spite of having a bit of trouble with drifting off, I still think While I Live is a very good book and a promising beginning to a new series.

4/5 - sometimes a wee bit dull, but true to Ellie with a few great action scenes

That second quote, incidentally, oddly made me think of my incompetence in the kitchen. I used to stand around watching helplessly as the women buzzed around on holidays. Eventually, thank goodness, I realized that I'm perfectly capable of doing chores that don't involve stirring and mixing. I can set a table and clean up after a meal. Whew. Big relief.

Since this book is set in Australia, it's another one for the Armchair Traveler Challenge. Wow, have I been a traveling fool.

Gotta go. Action Squirrel and I have had a busy day with the nuts. Nighty night.
Posted by Bookfool at 11:05 PM