"This is Bemmie!" grunted Ruby, using a knee to shove Bemmie away from the door. "She's jealous because Ivy has eggs to sit on and she doesn't." Ruby pointed to Bess. "And that one - she's a pig. She only looks like a chicken." She laughed at her own joke. "Her name is Bess."
Dove gave a little wave. "Hey girls!"
Bemmie squawked and Bess gorged.
"They're not impressed by company," Ruby said.
"They sure make a lot of noise."
"They calm down at night, when I read to them."

I picked this book up off a shelf, yesterday afternoon, and gobbled it right up. Love, Ruby Lavender is the story of a 9-year-old girl living in Halleluia, Mississippi (which, I assume, is a fictional name - but we do have some interesting small-town names in MS). She adores her grandmother, who is lively and loves pink. At the beginning of the book, Ruby and her grandmother “rescue” (steal, actually) three chickens headed to slaughter and throughout the rest of the book, Ruby spends time reading to her chickens from the dictionary and lavishing them with care.

When Miss Eula, her grandmother, leaves to visit her son in Hawaii and the new grandbaby, Ruby isn’t sure quite what to do without her. She and her grandmother regularly write notes to each other and mail them via a secret hole in the roots of a chinaberry tree. They continue to write from a distance and Ruby eventually makes a new friend, Dove, who helps her understand herself and the child who torments her, Melba Jane. Ruby has a shared history with Melba Jane that is gradually revealed; and, the two of them are having trouble working things out so they can move past the grief and blame.

This is another book that I don’t feel I can do justice to. Ruby and Miss Eula are quite funny and their letters are a hoot. The book is jam-packed full of quirky characters and is incredibly family-friendly. Ruby's exclamation of surprise is, "Good garden of peas!" Nobody ever swears; it may be the cleanest book I've read in years. Both the humor and the more serious issues are handled with skill and grace. I jogged right over to add Deborah Wiles' next book, Each Little Bird That Sings, to my wish list. And, I'm sure I'll be giving Love, Ruby Lavender a reread when I'm in need of a quick upper.

5/5 - Good garden of peas! What a delightful, sweet, funny and meaningful little book.

Also, Love, Ruby Lavender would have been a great book for Maggie's Southern Reading Challenge, had I not balked at the idea of reading about the South in the summer. The fact that Ruby wiped sweat off her brow, waved away bees and scratched mosquito bites absentmindedly really gave the book the ring of truth.

It's 12:26 p.m. and the kiddo is asleep, again. His internal time clock is completely whacked up. Hubby says we're all backwards: the kiddo is on Australia time. I guess the two of them can hang out together at night, for a while.

In honor of the spouse's return, I have charged my cell phone! The cell phone sat in the bottom of my purse almost the entire time hubby was gone, batteries slowly draining. Nobody ever calls me except the husband and the eldest - occasionally the youngster, when he needs me to fetch him - and even if they do call, I don't answer if I'm driving. I just call back when I've stopped the car. Which explains why I never give anyone else my cell number - why bother if I'm not going to answer, anyway? If I'm not driving, they can catch me at home. I'm not very modern, am I?

Totally pointless anecdote that leads to a photo:

Up until a few years ago, we had a line of holly bushes in front of our house. I'm not a fan of holly; it's difficult to trim and I got a rash if I brushed against it; little black wasps like to hide inside and they can get pretty feisty when you begin to give the bush a haircut. One year, I did a bunch of trimming and had little scrapes and rashes all over the place. I stood back and looked at my house. We hadn't intended to stay in the house for more than 5 years and we've been living in it for 16, now - probably, it had been about 10, at that point. The thought that we'd move on soon, very soon, along with allergies to you-name-it (including mosquito bites) kept me from doing much more than potting a couple of bright flowers for the porch each spring. Finally, one year, I decided it was time to make the front yard look like I really thought it ought to, so I asked the husband to tear out all the holly.

I think he was a little bemused, at first, but he picked up the shovel and started digging. We put a line of monkey grass along our cement path and filled one area completely (monkey grass is easy to grow), that first year. Then, the next year, we started experimenting with plants and worked on slowly trying to fix that nasty clay soil. I'm still learning what grows and what doesn't; and, some years the plants that usually work just keel over from the heat. This is one of those years. Typically, my impatiens are the size of bushes by July, but they look like I just planted them and then stood there insulting them rather than offering them a drink. We've alternated between intense, hot, dry spells and heavy rains; the plants don't care much for that. It's kind of messy because the humidity is driving me indoors, but here's what my porch looks like at the moment: 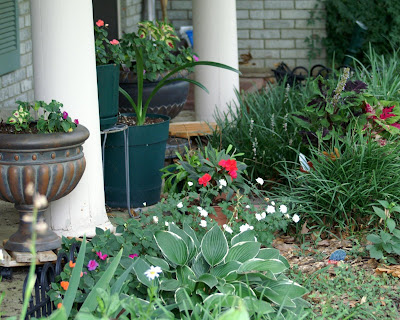 I love walking up the path to my front door, now. Isn't that nicer than a row of plain old stickery bushes? Even though it's been a bad year for plants, it still makes me smile.

While walking around outside, I found this under a tree beside the driveway: 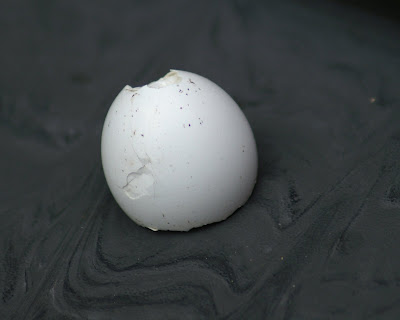 The bottom side of that little egg looked like it had been pecked in a straight line and there were traces of tiny feathers, so I got the feeling that something did manage to hatch and then the egg was kicked from the tree. That marbly-looking surface it's sitting on is the bumper of our very old, very dead Nissan. Anyone need a dead Nissan? Come and get it; it's all yours if you're willing to haul it away.

Off to read a little, kick the kiddo and try to pry his jaws open like a baby bird to feed him, poor thing. He's a mess. Wishing you a happy day.

Bookfool in need of a pair of cymbals to wake the kid
Posted by Bookfool at 9:16 AM