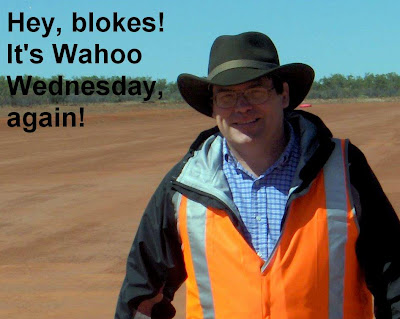 Wednesday, already? Wow, where does the time go? I have many things to be grateful for, this week. First and foremost, of course . . . Hubby's made it back, safe and sound, from Down Under!!! Wahoo! Doesn't he look adorable, all decked out in the Outback? I picked out the hat when we did some last-minute supply shopping before dropping him off at the airport when he left for Australia; and, as the spouse was unpacking, I asked if his hat worked out well. "It was perfect," he said. Wahoo for that, too! He does look pretty well-shaded, doesn't he?

2. Books! Hubby brought me some books from Australia!! Wahoo! 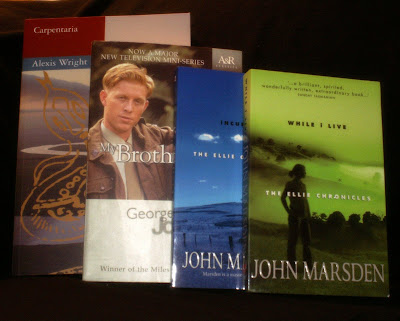 He said, "Your friend in Melbourne was right. Books are expensive in Australia. This is a big gift." Believe me, I'm very grateful. 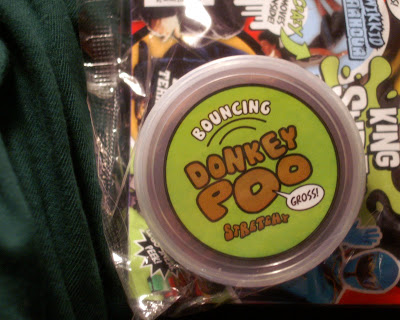 That's a freebie attached to a kids' magazine. Hubby bought the magazine primarily for the Free Bouncing Donkey Poo!! Well, who wouldn't?

4. Wahoo for stunning native art. I had no idea Aboriginal art is so beautiful. This is the design on a t-shirt: 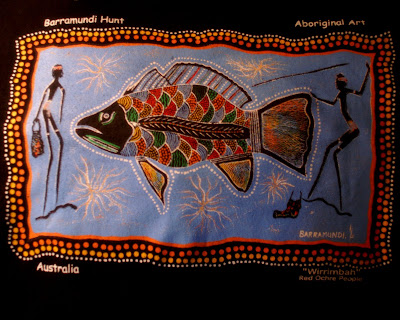 5. And, of course, Wahoo for United States independence. How many years has it been since we kicked the redcoats out? I mean, uh, asked them politely to leave and then when they wouldn't . . . well, you know. Hmmm. 231 years, I think. And, we still love Great Britain, over two centuries after our forefathers got all rebellious and tossed a bunch of tea in the bay, causing some serious caffeine withdrawal and a bit of a war. Happy Independence Day to my fellow Americans!!

I don't have a photo of it, yet, but hubby brought back a "small" didgeridoo - an Aboriginal musical instrument. He didn't think he could get the traditional size home, but now he's pretty sure he might need to practice daily (regardless of which size digeridoo he ended up with) because it turns out that learning to play the didgeridoo can ease sleep apnea. Tired of the spouse's snoring driving you out of the room or waking you up from a peaceful night's slumber? Well, get online and order that didgeridoo, right now.

Warning: Your spouse will make a noise that sounds like a tormented moose when s/he does his or her daily practicing. But, hey, you'd rather listen to ear-splitting moan sounds when you're supposed to be awake than when you're trying to snooze, anyway, right?

Husband stayed at the Hilton On the Park in Melbourne (where, it appears, we could not afford to stay on our own budget) and brought me the Swiss milk chocolate that was left on his pillow - or wherever. He's asleep, so I can't ask. Wow, why can't we do chocolate like the Swiss? That was one pretty amazing burst of chocolate sensation. Hubby also brought me one piece of chocolate that he picked up, elsewhere. I popped it in my mouth (note that I jump right on the chocolate gifts) and said, "Oh, wow. That tastes like rum." He replied, "Well, it did come from the casino . . . "

Speaking of Hiltons, I noticed that this week's Us magazine proudly announced that it was "100% Paris Free" on the cover. Hahaha. Good for them.

* "I know why kangaroos and wallabies hop," says the husband. "It's because the animals that don't bite have to keep moving. Everything that bites can swallow you whole."

* Hubby didn't have to stay in the normal quarters - trailers with a shared shower facility separate from their sleeping quarters. Instead, he was able to share a room with two other people on "the team" in the only hotel in Timber Creek ("We all sighed with relief when we saw there were three beds."). One of the fellows who used the shared facilities looked up while showering and discovered there was a snake hanging over his head. I didn't manage to find out whether or not he ran out of the shower, naked and screaming. It's the ending I desire to hear, though.

* If I can figure out how to turn his video into a YouTube thingy, I'll share the brief video he took of a crocodile splashing right next to the boat. It's really something. But, I don't know anything about YouTube, so advice would be welcome.

* On the crocodile-viewing boat tour in Timber Creek, a woman asked how long the crocodile they were viewing happened to be, as their tour guide described the method of determining a crocodile's age. "Tell you what," the tour guide replied. "I've got a measuring tape, so I'll hop out and hold one end by his tail and you take the other end. We'll find out."

* I swear the crocodile was smiling at the thought: 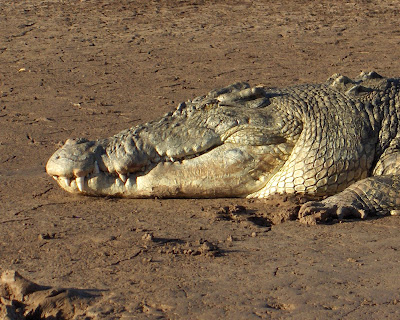 Get a load of those teeth.

Bookfool, hoping the photographs don't lead to a nightmare
Posted by Bookfool at 10:17 AM