The Accidental Mother by Rowan Coleman 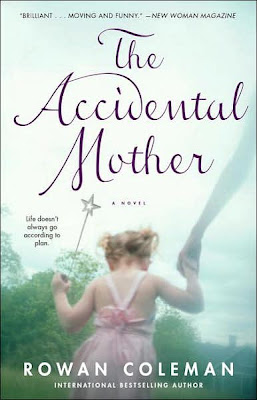 What led you to pick up this book? It was sent to me as an advanced reader by Simon & Schuster. When I was trying to decide which book to read next, I picked up The Accidental Mother and began to read it, just to see if it sparked my interest. The author sucked me in immediately.

Summarize the plot but don't give away the ending. Sophie and Carrie were best friends, but they drifted apart. Now, hopefully on the verge of a promotion, Sophie's carefully planned life (which does not include children) is thrown into chaos when she's informed that Carrie has died, her husband can't be found, and her two children need a home. Sophie had agreed to be their legal guardian in the event of disaster, with the thought that such an event would never occur, and now she's stuck caring for the two urchins while England's social service attempts to locate their father.

What did you like most about the book? I really loved just about everything about this book and had difficulty putting it down.

What did you think of the main character? Within just a few pages, I grew fond of Sophie and knew that I was going to enjoy reading her story.

Share some quotes from the book. Please bear in mind that this is an advanced reader copy and some changes may be made to the published version:

When Sophie is preparing for a meeting with representatives of a German company:

When Sophie is trying to explain to a social worker that she's hardly fit to take on the care of two small children:

"Look, I don't have much--any--experience with children, except for my own childhood and that was . . . unusual. My mother didn't raise me, a chocolate Labrador called Muffin did." Tess raised an eyebrow. "Okay, so that's a bit of an exaggeration, but in any case I don't have much to go on."

Share a favorite scene from the book: The youngest of the two children (Bella is 6 and Izzy is 3), Izzy, has become terrified of automobiles, due to the fact that she was in the car when her mother was killed in a terrible automobile accident. I absolutely adored the scene in which Sophie takes the children to her car and pulls Izzy onto her lap with the door open to begin the process of helping Izzy slowly recover from her fear by gradually exposing her to safe moments in the car, an idea she got from a manual on dog care that her mother gave her.

In general: I truly enjoyed this book, loved the characters and cared what happened to them. There were moments that I became annoyed with Sophie but I think you could say that I had faith in her; I believed that she would figure things out, in the end. A lot of what happened was unique and surprising, making the book even more pleasant. The story wasn't totally trite and predictable--at least, not in the way it easily could have been. I think I was expecting "Baby Boom: The Book," and it was not that at all. Author Rowan Coleman's story is original; there are funny moments, serious moments, and a few times I had to wipe a tear or two away. The Accidental Mother is a lovely story that I'd particularly recommend to those who like a tale of reinvention in which the character still manages to stay true to herself without allowing herself to continue clinging to her own fears.

4.5/5 - Excellent! I had trouble putting this one down. I don't think it's perfect; the prose is not what you could call lyrical or beautiful in any way--the writing is light--but I found it meaningful rather than fluffy and mindless.
Posted by Bookfool at 10:17 PM