The House on the Strand by Daphne du Maurier - RIP #7 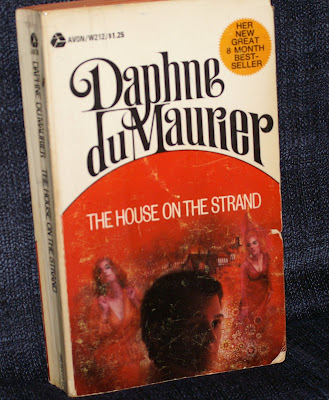 What led you to pick up this book? It's been on my stacks for about a year, on hold for the RIP Challenge. I originally snatched up a copy because I enjoy the author's writing.

Summarize the plot but don't give away the ending. Richard and Magnus have been fast friends since Richard's university years, when Magnus was his professor. Now, having recently left his job in London, Richard is spending the summer in Magnus's house in Cornwall. When Magnus asks him to participate in a time-travel experiment, Richard willingly ingests the time-travel formula in order to determine whether Magnus's journeys in time were hallucination or reality. But, there are dangerous side-effects to the drug and Richard's trips back to the 14th century become increasingly addictive as he takes interest in the lives of those he's observed and enjoys his escapes into the drama of medieval England.

What did you like most about the book? My favorite parts were the historical scenes that Richard observed during his time travel. The 14th century was full of drama - murder, plague, intrigue, illicit affairs . . . the story du Maurier wove about the earlier time period was absolutely engrossing and I could certainly understand why Richard wanted to keep returning to that fascinating world. I also liked the way she wrapped up the medieval storyline, so that it felt complete and one was not left hanging, wondering what became of those characters.

What did you think of the main character? He was okay - not unpleasant, but he was really negative about his wife and step-sons. However, he was a character in the midst of an upheaval and his frustrations made sense. They fed well into his urge to continue traveling, even after some very serious side effects would have stopped most people from drinking more of the time-travel potion.

Thoughts about the plot: I'm tossing this in because I think it's relevant . . . this book is based on the concept that time travel could occur via the ingestion of a chemical formula that effects the brain, opening up pathways to stored memories passed on in a person's genetic makeup. I found this far-fetched, in many ways. First of all, both men traveled to the same place and time; it made no sense that two people who are unrelated would have the same historical memories embedded in their brains, even if such a concept was plausible. The second problem I had with that concept would give away too much of the plot, if mentioned, but I never quite let go of my doubts. Still, I enjoyed the story enough that I was willing to try to fight my reluctance to believe such events could occur.

When Richard takes his stepsons out to keep them busy:

The rain petered out about four, giving place to a lustreless sky and a pallid, constipated sun, but this was enough for the boys, who rushed on to the Town Quay and demanded to be waterborne. Anything to please, and postpone the moment of return, so I hired a small boat, powered by an outboard engine, and we chug-chugged up and down the harbour, the boys snatching at passing flotsam as we bobbed about, all of us soaked to the skin.

When Richard's wife, Vita, invites over friends and the visiting couple get a little drunk and start behaving inappropriately (but Richard refuses to join in):

"Talk to me, Dick," said Diana, so close that I had to turn my head sideways like a ventriloquist's doll. "I want to know all about your brilliant friend Professor Lane."

"A detailed account of his work?" I asked. "There was a very informative article about certain aspects of it in the Biochemical Journal a few years ago. I've probably got a copy in the flat in London. You must read it some time."

Share a favorite scene from the book: When a character in the book dies unexpectedly, an inquest is held. I assume this is a very British process, bringing together the coroner and people who knew the deceased to determine the cause of death. In one scene, Richard gets the past and present confused and begins to prattle about the fact that it was snowing and that must have caused trouble. The story takes place in the summer, so there was no snow in the present time period and Richard has to do some quick talking to explain away his mistake, then another person backs him up. The whole inquest process was fascinating and I loved the way the second man backed up Richard's story, off the cuff, as well as the inquest's conclusion: Death by Misadventure. What a great way to describe an accidental death!

In general: I love du Maurier's writing style and found that The House on the Strand lived up to my expectations. As implausible as the chemically-induced time travel concept seemed, I was completely swept away by the medieval scenes and found myself looking forward to them. I also enjoyed the way Richard sought out connections (the remains of old homes and historical information about them) between the past and present. Du Maurier did a pretty good job of balancing past and present storylines, adding tension in the present via the dangerous side-effects of the drug while inserting believable drama and detail in the medieval scenes. I did have trouble distinguishing all of the characters and did a lot of flipping back to the family tree in the front of the book, but eventually they became clearer. I still found myself wishing the author hadn't created a story with two characters by the name of Joanna, an Oliver and an Otto, etc. It was very difficult to figure out who everyone was, until well into the book.

4/5 - Very good. While I wouldn't call this my favorite du Maurier book, it was an excellent escapist read: well-written, often suspenseful and eventually quite gripping. The atmosphere was brilliantly rendered and made The House on the Strand an excellent RIP read.
Posted by Bookfool at 12:40 PM