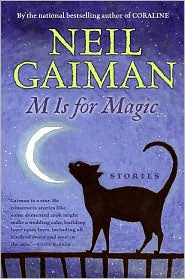 What led you to pick up this book? I snatched this one while I was browsing the library. It was added to my wish list after reading an RIP II review.

Summarize the plot but don't give away the ending. The book is a collection of short stories marketed to children - very tacky of HarperCollins, if you ask me, as I think most of them are really very adult. My guess is that the publisher is trying to ride the coattails of the "national bestselling" book Coraline.

What did you like most about the book? I'm not going to describe all of the stories, merely because I'm short on time, but instead speak in generalities. I really enjoyed Gaiman's ability to take a simple tale and add some unique qualities to it. Characters were easy to visualize, whether likable or revolting (or in between). Far and away my favorite story is "Chivalry", the tale of a woman who finds the Holy Grail in a charity shop and buys it for 30 pence. A knight then shows up to attempt to recover the Holy Grail and keeps returning with interesting offers. I just loved that story!

What did you think of the characters? I like the fact that characters were so well-drawn. I think that's what makes his stories seem rather plausible, imaginative or fantastic as they may be. One thing I loved about "Chivalry" was the elderly woman. She was wise and funny. I adored the way she dealt with the knight, her casual mode of speech, the way she put the knight to work and left the reader hanging a bit, before her decision whether or not to trade the Holy Grail for whatever he was offering.

Mrs. Whitaker peered at the sword. "It must be very sharp," she said, after a while.
"It can slice a falling hair in twain. Nay, it could slice a sunbeam," said Galaad, proudly.
"Well, then, maybe you ought to put it away," said Mrs. Whitaker.
"Don't you want it?" Galaad seemed disappointed.
"No, thank you," said Mrs. Whitaker. It occurred to her that her late husband, Henry, would have quite liked it. He would have hung it on the wall in his study next to the stuffed carp he had caught in Scotland, and pointed it out to visitors.
Galaad rewrapped the oiled leather around the sword Balmung and tied it up with white cord.
He sat there, disconsolate.
Mrs. Whitaker made him some cream cheese and cucumber sandwiches for the journey back and wrapped them in greaseproof paper. She gave him an apple for Grizell. He seemed very pleased with both gifts.

Quotes that baffled me, considering that the book is being marketed to children:

I was working in London, doing A & R for one of the major record companies. I was commuting into London by train most days, coming back some evenings.

"Effete bitch," he muttered beneath his breath. Still, it was reassuring to see other council members here. He wondered if any of them knew anything he didn't.

--from "How to Sell the Ponti Bridge"

Share a favorite scene from the book: I love the scene in "Chivalry" when Mrs. Whitaker's friend, Mrs. Greenburg, comes for her weekly visit and Mrs. Whitaker very casually tells her (upon inquiry) that the shiny cup on her mantle is the Holy Grail . . . to which Mrs. Greenburg replies that her son has a similar cup he won in a swimming tournament, but it has his name on the side.

I also really like the ending scene in "Sunbird," which is unfortunately a spoiler. I found "Sunbird" also was oddly adult, about a group of epicureans who have run out of unique things to taste. But, it's a great story.

In general: When I check out or buy a book from the children's or young adult section, I do so intending to read something light and geared for a younger crowd. In that way, I was very much put off by this collection of stories. It irritated me no end that they were written for a more mature audience. I loved the illustrations and enjoyed about half of the stories. Some of them simply left me cold, but that's typical for short story collections. It's a rare anthology that contains stories I would consider consistently high-caliber. I can't say enough that I simply do not think this book is for children.

3/5 - Average. It took me a while to get through this one and I was in no way overwhelmed with adoration for his writing. So far, Neil Gaiman is an author I feel lukewarm about. I thought "Chivalry" was exceptionally fun reading and there were elements of each story that I really liked. But, I'm still reserving judgment on the author till I've read Neverwhere.
Posted by Bookfool at 12:09 PM