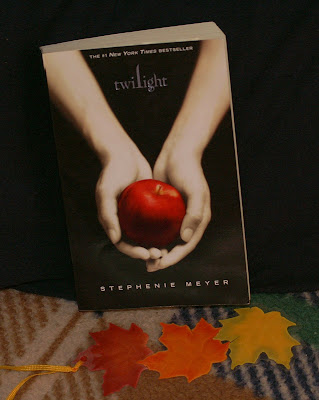 What led you to pick up this book? Many, many positive recommendations, but I was particularly influenced by Andi and Heather (followed by gushing praise from our car rider, who just finished New Moon). After waffling for quite a while, I bought the book rather impulsively. It's perfect for the RIP II Challenge.

Summarize the plot but don't give away the ending. Teenage Bella moves from Phoenix to live with her father in the Pacific Northwest. New to the small town and the daughter of the chief of police, Bella's arrival is much-anticipated and she quickly draws friends and admirers. But, she is transfixed by the Cullen family, particularly Edward. As she gets to know Edward and becomes close to him, she discovers that he and his family members are vampires. Bella falls in love with Edward and he with her, but there is danger in their proximity. He loves her, but can he overcome his natural instincts in order to be near her?

What did you like most about the book? I like the fact that it's not at all gory or violent. There are tense moments, but it's really a love story more than a vampire tale.

What did you think of the characters? I loved them! Bella is a little cagey but witty and interesting. Edward is the kind of male character that women fall in love with - sensitive, handsome, sexy.

Share a favorite scene from the book: My favorite part of the book was actually the scary part, when a vampire from another coven is hunting Bella.

In general: I was very, very pleasantly surprised by the content of Twilight. It was one of the most age-appropriate young adult books I've read in a while - no explicit s*x in thought or action (even the implication in inner monologue and dialogue is written appropriately), no gory violence. But at the same time, the author took her characters seriously. She didn't diminish Bella's feelings. Twilight is a softer, kinder vampire story than most, with a hero who is dangerous to the heroine but incredibly sensitive and tender. It was hopelessly romantic and genuinely emotional (in a good way), suspenseful without the evil feel of similar stories. It was also very unique, in many ways. And, I thought it was easy to connect with the characters and root for them. The only complaint I have is the length; I believe it could have been much shorter without losing impact. And, yet, I didn't mind the length; I didn't find myself drifting off or bored.

4.5/5 -Very, very good. I set my other books aside, for the last two days, I was so swept away. Definitely a great escape, a fun read, and a book I'd actually like to revisit. I'm glad I bought this one.