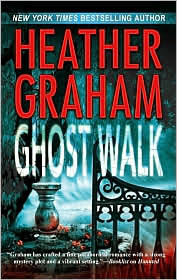 What led you to pick up this book? A friend sent it to me, last year, and I thought the book would make a good read for the RIP II Challenge.

Summarize the plot but don't give away the ending. When Nikki DuMonde sees a bum in the street and gives him $20, she has no idea he'll soon be dead and that his ghost will return to ask for help. And, when her friend Andy dies in exactly the same way and Nikki sees her ghost as well, her friends aren't so certain she's totally sane. But, Nikki's sure that the two deaths are connected and is determined to figure out why. Brent Blackhawk is the only person who truly believes her; he's a paranormal investigator who has been called to New Orleans to seek out a killer. He sees ghosts and communicates with them. When Nikki and Brent get together to solve a murder, ghosts talk and sparks fly.

What did you like most about the book? Things keep happening. Oddly, I liked the concept of people who can talk to ghosts better than the way it was written, but Graham kept the story moving well; it's very entertaining. I also thought she did an excellent job of using the setting, New Orleans, almost as a character in and of itself.

What did you think of the main character? I liked her; nothing in particular about her stands out in my mind, but she was a nice character.

This is about Brent Blackhawk, a character who was part-Lakota (either 1/8 or 1/4 - can't remember) but whose looks were so distinctive that most people assumed he was 100% Native American. I think it jumped out at me because of the recent reading of Raising Ourselves by Velma Wallis; it's the only quote I marked.

Growing up with a Lakota heritage had taught him a lot about bitterness and chips on the shoulder, but the past was just that - the past - and now people needed to focus on entering the twenty-first century, reaping the rewards of progress and technology, without losing sight of a heritage that was something precious, something to be preserved.

Share a favorite scene from the book: Brent Blackhawk had a ghost friend he occasionally visited in a graveyard. While I found that the "talking to ghosts" scenes were far-fetched (like sitting around with anyone else, having a chat), there was a cute scene in which that particular ghost was acting a bit impish.

In general: The book was not the slightest bit scary and there were some glaring plot holes, but I found it entertaining enough to overlook what I disliked and just chug on through. Graham is not a skilled writer, but she can weave an interesting story.

3.5/5 - Great setting used well, interesting storyline (although poorly crafted and with some plot holes), entertaining enough to overlook its flaws. If you can't tolerate the occasional inconsistency, skip this one.
Posted by Bookfool at 10:37 AM