This weekend, we drove up through the Mississippi Delta to a swim meet. It was around 9AM when we left home, so the fog had lifted. And, yet, I kept seeing what appeared to be clouds, close to the ground. What on earth were they? It was too late in the morning for any fog to remain. They looked a bit like columns of smoke coming off the fields, but there didn't appear to be any fires and, anyway, it would be awfully odd for the entire Delta to be aflame in tiny little bits and pieces. After about thirty minutes on the road, we came close enough to one of those rotating columns to see what the deal was . . . they were clouds of insects, like little mini Biblical plagues. 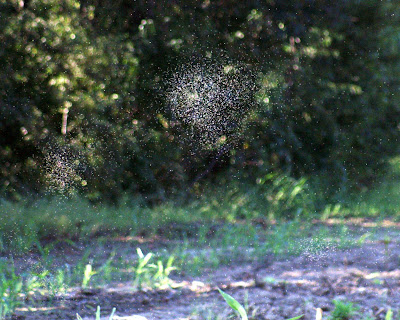 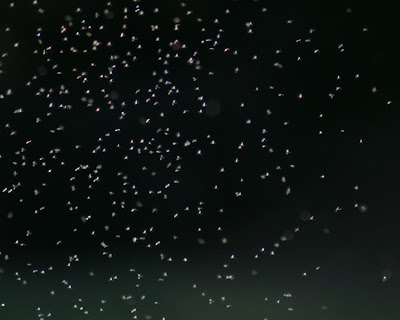 Yuck! Curious people just have to see for themselves, though, so we pulled over and hopped out to take photographs. If you enlarge the second photo, you can see wings and bodies - not clear enough to identify, but enough to make it plain that they were definitely insects. Whatever they are, dragonflies apparently eat them, as there were dragonflies zipping around, also.

September is cotton harvest time, so we also pulled onto a narrow dirt road to snap photos of the cotton before it's all gone - a good portion of the fields have already been harvested. Cotton is so pretty when it's ready for harvest. 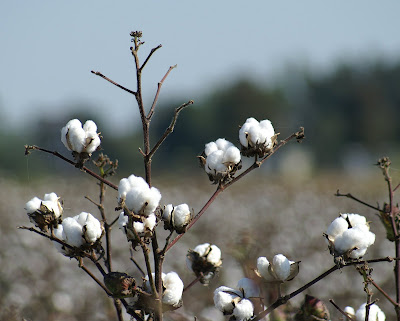 And, at the end of all that nonsense was the swim meet - just a tiny meet with three teams. Delta State University has a very nice natatorium and with only three teams there was plenty of seating. The meet was very pleasant. Kiddo had a goggle disaster that slowed him down significantly in his first event (they call it "eating goggles" - when the goggles slip down and end up in the swimmer's mouth), but otherwise did well.

We took a circuitous back-route from Cleveland, MS to Jackson and discovered that:
a.) There's an awful lot of interesting life on those back roads
b.) It would have been faster to return home and then double back to Jackson - there simply is no direct route to the big city from the Delta
c.) Mississippians are friendly. But, we already knew that. At my other blog, there's a photo of a tree full of egrets that a very nice man pointed out to us, when we were pulled to the side to photograph a smaller group of them.

And, last but not least, we met up with the eldest and ate dinner with him. Here are my boys outside the restaurant: 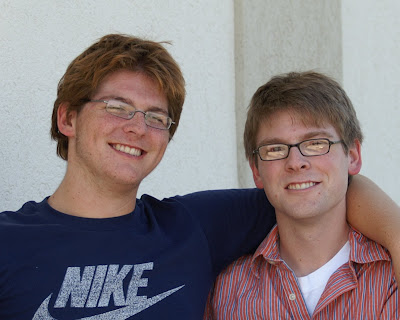 I finished one book, late last night, and have decided to count it as an October read. September round-up will be next, followed by a review of The Collection by Gioia Diliberto. This was not a great reading week; I'm still balancing 4 other reads and not likely to finish any of them soon. Happy Accidents is grabbing me the hardest, so I may try to focus on that one and get it finished, in the next few days.

Hope everyone had a fabulous weekend!

Bookfool
Posted by Bookfool at 10:11 AM