A Men Meme , a Million Miles, a Mail Delivery, a Mega-cool Contest and More 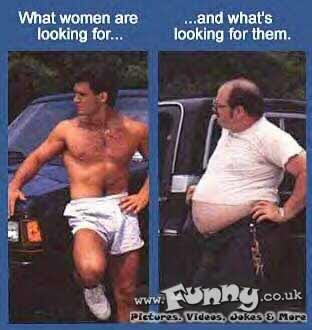 If only it wasn't true.

Lynne tagged me for the following meme . . . and you can't help but love the description:

“Ten Literary Characters I Would Totally Make Out With If I Were Single and They Were Real But I’m Not, Single I Mean, I Am Real, But I’m Also Happily Married and Want to Stay That Way So Maybe We Should Forget This.”

Hahaha. I love it. This is a much harder list to come up with than I imagined. I tend to forget the characters in a book pretty quickly, so I had to really work at it. Here's my list:

1. Mr. Darcy from Pride and Prejudice (Colin Firth would do fine)
2. Ranger from the Stephanie Plum series by Janet Evanovich
3. Rhett Butler from Gone with the Wind
4. Either Sebastian or Max in the Gardella Vampire Chronicles by Colleen Gleason (or both, but not at the same time)
5. Joe Morelli from the Stephanie Plum books
6. William Ferrers from Sense and Sensibility (not the actor - the character)
7. Cavin of Far Star from Your Planet or Mine? by Susan Grant
8. Dr. Powell from The House on the Strand by Daphne du Maurier
9. Reef, also of Your Planet or Mine by Susan Grant? (and How to Lose an Extraterrestrial in 10 days, which I haven't yet read)
10. Edward Cullen from Twilight by Stephanie Meyer

That was fun! I'm supposed to tag a few people. Les, Colleen (because she had to have gotten her inspiration for Sebastian and Max somewhere), and Kookiejar, tag, you're it!

Speaking of Colleen and her wonderful novels . . . Kailana has a contest going and the prize is a $25 Amazon gift card, a Vis Bulla t-shirt and a copy of Colleen's next book, The Bleeding Dusk. Not an ARC but a real copy with the gorgeous purple cover. Signed and everything! Oooooh, ahhhhh. In order to enter the contest, you need to either write a fan fiction, draw a picture, or take a photo relating in some way to Colleen's novels - the Gardella Vampire Chronicles (read the full details at Kailana's blog). And, of course, if you haven't read them you really ought to just run right out and get the first two, anyway. So, Kailana has given you added incentive. Very cool. Don't you think Colleen must have done something good to garner such fantastic cover art? I never cease to be amazed by her knock-out covers.

In latest news . . . it's Million-Mile Monday (for us, anyway)! Meaning, Delta's Sky Miles program sent hubby a note saying he has reached a million miles of travel with Delta Airlines and he gets a free gift. Well, cool. But, think about it. That's one airline we're talking about. A million miles in 20 years. 50,000 miles a year. At an average of 50 weeks per year (let's just assume he actually stays home for two weeks a year), we're talking 1,000 miles per week. Since 2001, the airlines have downgraded the number of miles they award. That makes it 1000+ miles - not just a thousand but at least a thousand miles a week, on average, that my husband has traveled since our move to the Deep South. And, my Huzzybuns does not just fly with Delta Airlines. Is it any wonder I feel like I've been a single parent for my entire adult life? I looked at that card and thought maybe the husband ought to give me a gift for putting up with him. So, I went to the Delta site and picked out the free gift, a cute little roll-on suitcase. And, you know who will be here when it shows up on the doorstep . . . moi. I feel like I should insert an evil laugh, here. Except, you know, the husband said it was fine if I picked the suitcase out for myself. It would almost be more fun to feel like I'm being sneaky.

It's also Mug the Mailman Monday! Although, I didn't have to mug him because he very kindly delivers. Point being, I got a book in the mail, today. Ask anyone about that and they'll say, "So, what else is new?" Okay, yes, books frequently come and go by mail, here. But, this one is special because I won it from j.kaye in a drawing. It's always ridiculously exciting to win something, especially when you're enough of an airhead to have already forgotten by the time it arrives (yep, that's me). I've tucked her note inside, so you can see it: 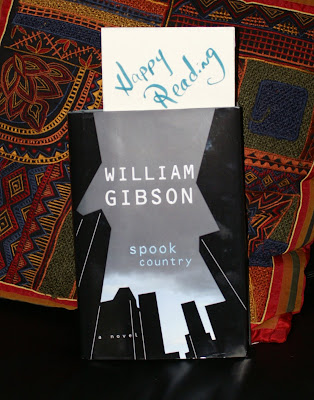 J. Kaye's review made it sound like loads of fun, so I'm hoping I'll get to this one, soon.

Currently reading: A Vision of Murder by Victoria Laurie. Figured I'd try to squeeze in one more RIP novel. This one has something to do with ghosts, but I haven't gotten that far, yet.

The book I most want to get my mitts on, as soon as possible: Divisadero by Michael Ondaatje

A random photo that I happened across while looking for photos of autumn leaves (but it was taken in December . . . in Louisiana): 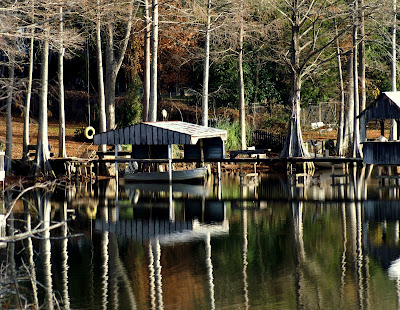 Makes you want to break out the paint set, doesn't it?

Must go. My cat needs me. Happy Monday or Tuesday or Whatever Day You Read This!

Bookfool in a good mood
Posted by Bookfool at 3:18 PM