It's just one of those weeks, ya know? 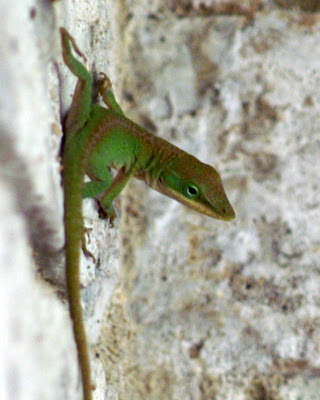 I can't seem to find myself coming or going. So busy. So, so busy. Kiddo has been overwhelmed by it all - I feel like I empathize, and all I do is guide him, chauffeur him, clean his clothing. It's not like I'm attending classes, doing mounds of homework, going to band and swim practice and trying to please the opposite sex with my looks. He has a lot on his plate.

Meanwhile, back at the boring old ranch-style home, I forgot Wahoo! Wednesday. Completely forgot. My sidebar is totally outdated. I got an early jump on visiting RIP II bloggers and then fell on my face.

What's the good news? I finished a book - only one, but it was a good one: The Accidental Mother by Rowan Coleman (an ARC from Simon & Schuster). I am now 3 book reviews behind, which is one better than 4. Might as well just smile and catch up when I can.

I haven't taken a single photo, this week - not one. Weird. The anole lizard, above, was snapped last week.

After band practice, today, I asked the kiddo if he'd like to go out to eat. He said, "Sure." I asked him to choose my next fiction read, while we waited for the food - I'm still working on Happy Accidents and haven't touched Haunted Castles of the World despite my best intentions (although I really think I will read more of it, any day now); but, I have to keep at least one novel going, at any given time. I handed him the two books: The House Next Door by Anne Rivers Siddons and The House on the Strand by Daphne du Maurier. Wisely, he read the cover blurbs, asked me what the deal was with the house theme (which I hadn't noticed) and chose the du Maurier. Smart kid. I love du Maurier. So, I've begun reading The House on the Strand.

I've also read two of the stories in Neil Gaiman's M is for Magic and I'm wondering . . . has this one been banned, anywhere, yet? Because, the book is marketed as a children's book, but those first two stories were what I would term "very adult". In fact, it's hard for me to fathom that a child would enjoy either of them. Do kids know, for example, what it means to do work in "A & R"? I know A & R stands for Artist and Repertoire because of a course I took on Copyright Law (focusing on the music industry), many years ago; but, it's not even defined in the story in which the concept is mentioned. That baffles me. My current thought process is that the book is billed as a children's book because the publisher thought it would sell better; at least one of my children lacks that bias that adults tend to harbor against short stories. I'll keep hacking away at the book and see what I think of the remaining stories.

But, for now, I'm off to read Daphne. I hope to be a normal blogger, soon. Hope everyone is having a peachy week (or has had - I'm always messing up on the time zone thing).

Bookfool, excited about the coming cold front and wondering what I did with the warm socks
Posted by Bookfool at 9:48 PM