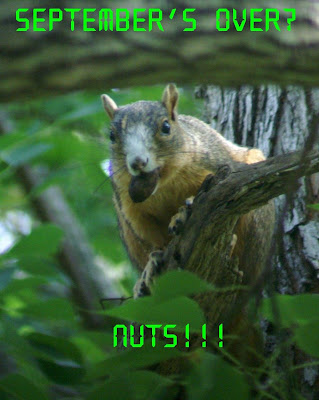 This was not a bad month, in spite of that last week, during which I couldn't concentrate on anything long enough to actually finish reading a book. Some weeks are like that. In brief, my September reads:

1. God is My Co-Pilot by Col. Robert L. Scott - Memoir of a pilot who flew transports over "the hump" (the Himalayas) and later flew fighter planes in Asia during WWII. Written while the war was still in progress. Detail of geography was occasionally dull, but the second half was particularly gripping.
2. Dying in Style by Elaine Viets - Cozy mystery, first in the Secret Shopper series, in which professional secret shopper Josie Marcus must find the murderer of exclusive shop owner Danessa and her live-in lover to prove her innocence in their deaths. A nice, fluffy mystery.
3. Garden Spells by Sarah Addison - A story of food, gardening, a magical apple tree and a Southern family with unique gifts. I loved this one and had trouble putting it down.
4. Alas, Babylon by Pat Frank - A classic apocalyptic novel, set in 1950's Florida, describes what could have happened if the Cold War between the U.S. and Soviet Union had turned hot. Fascinating, both for the peek into the 50's and the idea of civilization thrown backwards by the loss of modern conveniences.
5. Elsewhere by Gabrielle Zevin - Young adult story of the afterlife; a young girl meets the grandmother she never knew and they all age backwards, learning how to make use of the time they're given. Weird, funny and unique.
6. Raising Ourselves: A Gwich'in Coming of Age Story from the Yukon River by Velma Wallis - the memoir of the best-selling Alaskan author of Two Old Women, her heritage and the rampant alcoholism. Very informative, sad and amazing. Huge thanks to Lexie for paying extra to get this one to me quickly!!!
7. Mum's the Word by Kate Collins - A cozy mystery about the owner of a flower shop, who goes in search of a killer and the man who wrecked her cool car, thinking they're one and the same. Breezy writing, not a perfect mystery but a quick, fun read.
8. Lottery by Patricia Wood - The story of a man with an IQ of 76 (but he's not retarded - just slow) who wins the Washington State Lottery, written from his point of view. Excellent story, well-drawn characters; a surprising page-turner. I could hardly bear to put this one down and highly recommend it (full review forthcoming in Estella's Revenge October issue)
9. A Girl Named Zippy by Haven Kimmel - The lighthearted memoir of a girl growing up in small-town Mooreland, Indiana. Loads of fun.
10. She Got Up Off the Couch by Haven Kimmel - A continuation of the first memoir, this time with her mother's decision to return to school as a significant turning point in her young life and that of her family. 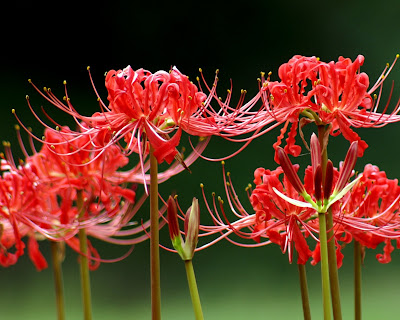 Currently still having an Attention Deficit Reading fit. I've started another book, Ghost Walk by Heather Graham. Some day, I'll actually finish another book. Next up: review of The Collection by Gioia Diliberto. Off to read because I've had a long day (but a good one). Pardon me for my lack of blog-hopping. I've been trying to catch up on the loading of swim photos and it's taking forever. Hope to get in more blog hopping, tomorrow.

Bookfool
Posted by Bookfool at 12:58 PM