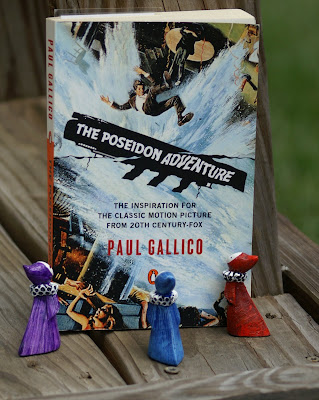 What led you to pick up this book? I found a copy for $1 and waaaay back in the 1970's, I enjoyed the movie. Plus, the cover is a grabber. The poppets were transfixed.

Summarize the plot but don't give away the ending. When a cruise ship and freight hauler is flipped upside-down, a small group of passengers decide that in order to have a chance at survival they must climb to the ship's hull.

What did you like most about the book? The one truly frightening scene - right near the beginning - when the ship is hit by a large wave and turns over.

What did you think of the main character? This particular book had a cast of characters and the author did a lot of what writers call "head-hopping", moving from one character's viewpoint to another. I have to admit that, upon reflection, I didn't truly like any of them.

When Scott (whose part was played by Gene Hackman in the original movie version) was trying to convince the passengers around him to climb upward, rather than just awaiting their fate:

Scott said, 'I have. Do you know the cause of death of most people who are either lost, shipwrecked or drowned in inhospitable country?'
'Panic,' Muller volunteered.
'No,' said Scott, 'apathy. Doing nothing, just plain quitting - giving up. The statistics show it. The records indicate that the mere action of keeping busy, trying to do something keeps people alive.'

Share a favorite scene from the book: Hmm, I already mentioned my favorite scene, so I'll tell you about the scene that made me want to throw the book against the wall. When a young member of the group disappears, his teenage sister, Susan, splits off to look for her brother and is raped in the corridor. The rapist is a young man from the crew and he splutters about thinking she was a stewardess (as if that makes a difference), panics and runs away. Before he leaves, Susan actually tries to stop him, saying it's okay and that she won't tell a soul. Oh, please!!!! I know a mere two people who have been raped; both attempted suicide and one succeeded. The one who did not succeed in taking her own life has continued to battle with depression and anger for over 40 years. I nearly gave up on the book because it made me furious the way the author diminished Susan's feelings. The only reason I continued was that, by that point, I'd made the decision to just get the book over with.

In general: The book was a huge disappointment. The characters were unlikable, vicious, bigoted, chauvinistic or wimps. Instead of banding together and cooperating fully to save their hides, they bickered and criticized each other. I could have read the first few chapters, enjoyed the one frightening scene and then quit and I would have been far better off.