We have swim meet #2, tomorrow, so before I forget . . . a very wahooey photo of one of the kids on my son's swim team. His name begins with a "J". Cosmic coincidence? No, of course not, but I can have fun if I want to: 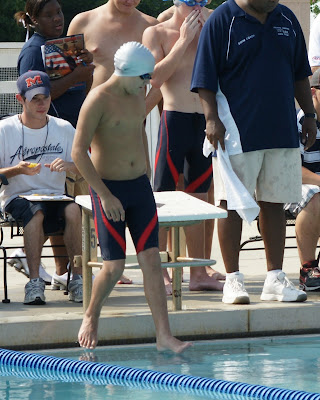 August Reads in Review (if applicable, I've added a link to the review via the title -- I have not yet reviewed two of these books):
Matrimony - Joshua Henkin - Very good story of friendship, marriage and the ups and downs of both. Slow, character-driven read.

High Altitude Leadership - Chris Warner & Don Schmincke - Interesting book in which the principles of mountaineering are applied to business. Hubby & I both read this one and had different thoughts, but we especially enjoyed the climbing stories and both came out of it thinking, "Those guys are nuts." Will post full review, soon.

When Twilight Burns - Colleen Gleason - The 4th in Colleen's vampire series. I love every one of them -- always swash-buckling, knuckle-biting, paranormal fun -- and I was happy with the romantic turn in this book, although at the same time I was a little surprised at how she handled it (not in a bad way).

The Best of Robert Service - Poetry, heavy on rhythm and rhyme but never annoyingly so. I loved the variety, the humor, and the sense of place.

Why Women Shouldn't Marry - Cynthia and Hillary Smith - The authors had some good points but the book was primarily negative -- not about why it's great to be a single woman but more of a bitter perspective on how men can ruin your life if you choose to be tied down.

Don't You Forget About Me - Jancee Dunn - A fun, light read about a woman dealing with the unexpected end of her marriage and immersing herself in memories as her high school reunion approaches. Pretty good for a first novel, although I think she could have elaborated on some of the heroine's characteristics to make it an even better book.

Get Smart: How e-mail can make or break your career and your organization - M. Pulley and J. Hilberry - Just what it sounds like; very brief and could have used more examples but a very good little book that probably everyone who e-mails could stand to read.

A Promise to Remember - Kathryn Cushman - The story of two mothers (one wealthy and wimpy; one a single mother and tough) each dealing with the loss of a son in the same automobile accident. Very good, although I think it was obvious the author hasn't really experienced grief. Still, a good story and I'm looking forward to reading more by this author.

Copper Fire - Suzanne Woods Fisher - A former German Resistance worker finds out she is the only remaining relative of a cousin who survived Dachau and, after fetching the cousin from Germany, must deal with the cousin's emotions as she adjusts while facing a love from her past and searching for clues to the whereabouts of a war criminal. I'd have liked a little more depth, but I still plan to read her first book.

Princess Academy - Shannon Hale (YA) - When all the girls from Mt. Eskel between ages 12-17 are sent to a makeshift academy to prepare for the fact that one of them will become princess, Miri finds that she loves learning but isn't certain whether she wants to end up marrying a stranger. Loved this one!

Did I Expect Angels? - Kathryn Maughan - A suicidally depressed widow and mother of one is on the verge of ending her life when a friend shares his own story of grief and becomes, in the process, her angel. Hard reading and yet I couldn't put it down. This author understands grief. Review will be posted on the 14th.

You guys are going to be so envious. I inherited this bunny planter (that's Violet poppet looking up at him -- the doll in the background is not mine): 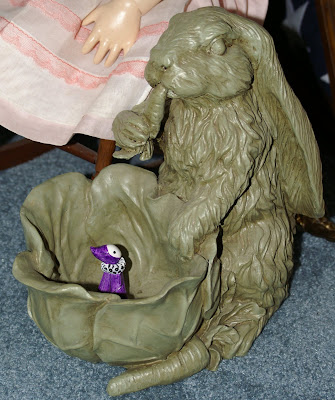 We stuck the bunny up front in the moving truck, for the drive home. Oklahoma is a state with quite a network of toll roads. We always pay to use the toll roads because the traffic is light (and the path familiar). So, I plunked a bunch of change for the toll roads in the bunny's basket and dubbed him, "The Money Bunny". When we got to Arkansas, we no longer needed to keep change within reach and we both got the munchies. I was driving, so Huzzybuns stuck an open bag of potato chips in bunny's basket and he became "The Potato Bunny". Then, we turned on the iPod, after a time, using a portable speaker. Plunked the speaker and iPod in his basket and he became "The Music Bunny". Darned if I didn't inherit an all-purpose bunny. Everyone should have one.

Soundtrack of our return trip:

Next up: A guest review of The Last Days of Krypton by Kevin J. Anderson, written by my youngest (frequently referred to as Kiddo).

Happy Weekend! Safe, dry thoughts are going out to those who are having a Hurricane Hanna weekend. May she move quickly and do little damage.
Posted by Bookfool at 7:34 PM

Email ThisBlogThis!Share to TwitterShare to FacebookShare to Pinterest
Labels: Month in Review