The Last Days of Krypton by Kevin J. Anderson: A Guest Review 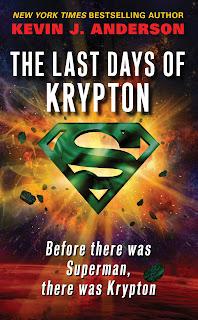 The Last Days of Krypton by Kevin J. Anderson
Copyright 2007
Harper Fiction/Sci-Fi
467 pages
Guest review by my youngest son, William, who is like Pac Man with books (munch, munch, munch). He often reads 3 times as many books as I do, in a year.
What led you to pick up this book? My mother ordered it on me. [Bookfool's note: I thought William would like it, so when an offer to review arrived, I requested a copy for him to read.]
Summarize the plot but don't give away the ending. The Last Days of Krypton is the prelude to Kal-El's (Superman) leaving Krypton because of the planet exploding and the story of his father's life.
What did you like most about the book? The foreshadowing -- subtle but any true fan can see the foreshadowing and knows what they're talking about. Like Yar-El telling Jor-El not to be afraid to have children.
What did you think of the characters? You can tell from the beginning of being introduced to them whether they're going to be good guys, bad guys or just plain fools that'll destroy the world. They sounded about right.
In general: There are some differences from the movie version. I've never read the complete original comic versions about what happens before Superman comes to earth, so I can't say whether they follow the storyline as set by the creators.
Recommended? Yes. Those that enjoy comic books will find this a good read. Those who like science fiction/fan fiction will probably find it enjoyable.
Cover thoughts: The cover hurt my eyes, but it's a very interesting one. It gives you the unique presentation of what happens at the end, as the planet is going boom. [Bookfool's note: The cover is holographic].
Many thanks to William for reading and guest reviewing The Last Days of Krypton and to Harper for offering the opportunity to review the book!!
Coming up, next: A review of The Words of War by Donagh Bracken. Yes!! I finished it! I had such fun, but I was totally bummed when General McPherson was killed. I could really get into studying the Civil War.
Posted by Bookfool at 3:00 PM