Walking Through Walls by Philip Smith 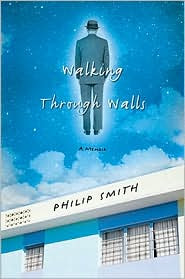 This book is going to be a difficult one to review because it is so far off-the-wall. I was hoping Walking Through Walls would be similar to an Allison DuBois book, although the book is a memoir about growing up with a psychic healer, not life as a psychic. Instead of the sweet book about psychic life that I'd hoped for, the book begins with a young Philip Smith drinking an alcoholic beverage in a sleazy Florida bar -- at the age of 6. To be honest, my initial impression was that Smith was the victim of child abuse. His parents ignored him and allowed him to drink alcohol in a bar with a large picture window into a pool where things you really wouldn't even want your teenager to watch occurred? That's just not right. His family and their lifestyle were so far from normality that I had a great deal of difficulty reading the book.

I set the book aside in disgust and then eventually managed to shift gears and read the whole thing. Smith tells about how his father, a well-known decorator living in Miami, suddenly decided to take up a macrobiotic diet and study spiritualism and psychic healing. Gradually, he began to perform healings (free of charge) and eventually he was able to heal by phone, using a pendulum, maps and the essence of homeopathic medicines, which he projected to the person in need.

p. 217 of Advanced Reader Copy, Walking Through Walls (changes may have been made)

Sound like a stretch? It was a bit too much for me.

Now and then, though, I really enjoyed the sense of time and place:

The big pink Philco regrigerator was humming noisily as she squished meat, eggs and crumbled Saltine crackers in a large Pyrex bowl. Just as I was about to announce my presence, the sirens wailed again. They seemed to be either louder or coming closer. I was now officially scared. Having spent several years in school perfecting my "duck-and-cover" routine that would protect me in the even of nuclear war, I quickly climbed into the cabinet under the sink, huddled next to the Ajax, and waited for the war to start while Mom chopped onions.

One day Mom was wearing some vividly colored Mardi Gras pop beads (so unlike her) that her sister had given to her. They caught my father's eye. Suddenly he had a decorating epiphany that these beads could become a new way to make modern draperies.

So, Philip Smith's father, Les Smith, was not only a psychic healer, but the man who invented those funky bead curtains that went so well with shag rugs and psychedelic posters in the 1960s. Interesting.

The book is very readable, but contains some adult material -- too much for my taste. While Smith seems to defend his parents lifestyle and blames the way they let him run loose to indulge in drugs and sex on the time and place, I found young Philip's exploits sordid, more than enough to earn a Family Unfriendly Warning. I also found that it became more difficult to believe the stories of healing instead of easier, as the book progressed.

Some people may enjoy this memoir, but it was definitely not my cuppa.

Update on The Misery:

Still feeling awful; have called to give the doctor's office a nudge. If someone wants to attempt to heal me psychically or pray me well, feel free. Just let me know, so I can give you proper credit, after I begin bouncing around like a Tigger. At the moment, I'm relying on sleep, fluids and aspirin. But, that doesn't really seem to be doing the trick. Hopefully, I'll be able to stop whining at you, within a few days. Cross your fingers and toes.

Yesterday, as I was preparing to back out of my driveway, a FedEx truck drove up and parked right behind me -- which, for one thing, convinced me I should leave a few minutes earlier for the school pick-up. Apart from that minor regret, there was also an "Oh, boy! Oh, boy!" moment, when I saw the return-address label, because I've been anxiously awaiting this particular book, an ARC of Bedlam South by David Donaldson & Mark Grisham. Those who visit regularly undoubtedly know I've recently become a Civil War enthusiast. Bedlam South takes place during the Civil War. Wahoo! I started reading the book practically the moment I opened the parcel (in the doctor's office -- he can just forget borrowing this one, although he did ask me about it and . . . well, I gushed about how much I was already enjoying it). So far, I am absolutely loving this book. I hope to finish it, this weekend. Assuming I'm alive. I figure if I'm still able to sit at the computer, it's a good sign.

Update: Got antibiotics. Took one. Waiting for the miracle of modern medicine to take hold.

Next up: Reviews of Farworld: Water Keep and The Darcys and The Bingleys. You will be happy to hear that I enjoyed both of them. Negative reviews are such a bummer.

Wishing everyone a pleasant, book-filled weekend!

Bookfool, who hopes to quit whining and feel better, soon
Posted by Bookfool at 1:27 PM