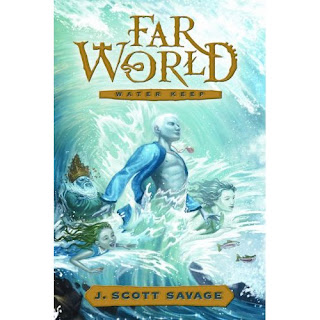 All at once something occurred to Kyja -- something that seemed completely impossible. She grabbed Marcus by the shoulder of his cloak. "The man in the box. Was he living there?"
"I guess so." Marcus turned to Ty with a what's-the-big-deal look.
But Kyja felt her heart pounding. This was all wrong. What kind of world was it where amazing machines were everywhere, but a mother and her baby had to live in a broken car and an old man slept in a box?
What led you to pick up this book? I read a fabulous interview with J. Scott Savage -- I have no idea where -- that piqued my interest. Then, I read a million reviews of the book and a zillion more interviews. It just grew worse and worse. Savage sent out 150 ARCs? And, I wasn't one of the people he asked to review? Sob, fuss. I signed up to try to win a copy, all over the blog universe. I just had to read that book everyone was raving about. In fact, I ended up winning two and rejecting one (mustn't be greedy). When my copy arrived, I foisted it on my son. He gobbled it up and I kept hearing him laugh while he read. So, you can imagine how eager I was for my own turn.
Summarize the plot without giving away the ending.
Description borrowed from Amazon.com:
Other people may see thirteen-year-old Marcus Kanenas as an outcast and a nobody, but he sees himself as a survivor and a dreamer. In fact, his favorite dream is of a world far away, a world where magic is as common as air, where animals tell jokes and trees beg people to pick their fruit. He even has a name for this place- Farworld.
When Marcus magically travels to Farworld, he meets Kyja, a girl without magic in a world where spells, charms, and potions are everywhere, and Master Therapass, a master wizard who has kept a secret hidden for thirteen years, a secret that could change the fate of two worlds.
But the Dark Circle has learned of Master Therapass's secret and their evil influence and power are growing. Farworld's only hope is for Marcus and Kyja to find the mythical Elementals- water, land, air and fire- and convince them to open a drift between the worlds.
As Kyja and Marcus travel to Water Keep, they must face the worst the evil Dark Circle can throw at them- Summoners, who can command the living and the dead; Unmakers, invisible creatures that can destroy both body and soul; and dark mages known as Thrathkin S'Bae.
Along the way, Marcus and Kyja will discover the truth about their own heritage, the strength of their friendship, and the depths of their unique powers.
What did you like most about the book? It's a great escapist read, very adventurous but often light-hearted. I love it when an author doesn't take his subject matter too seriously and injects plenty of humorous moments.
What did you think of the characters? Loved the hero and heroine, but I was particularly fond of Kyja, a lovely character with a huge, warm heart.
Describe your favorite scene: Toward the beginning of the book, a pack of bullies sets out to beat up Marcus. Marcus thwarts their efforts with a little magic and a mop handle.
Recommended? Absolutely. Especially recommended for those who love fantasy, but I'm not a big fantasy reader and I enjoyed the book. It was a nice change of pace. It's very, very family-friendly. I always appreciate a good, family-friendly read that I can share with my son.
In general: The only thing I didn't like about the book is something that seems to annoy me every time I read fantasy; there comes a point at which I think most authors go overboard when it comes to marching out more and more new characters -- more monsters or bad guys of different varieties, in particular. After a time, I tend to get them all mixed up in my head and I'm not sure which critter I'm supposed to visualize. It's a Bookfool problem. I need a glossary of creatures, I suppose. Since my copy is an ARC, there may be one in the final copy -- I just don't know.
Cover thoughts: Love it; absolutely love the cover. I'm not actually certain who is on the cover, but I still love it.
Extra thoughts from Kiddo: I tried to snooker him into sharing what he thought about the book, before I read it, but he dodged my efforts. However, he accidentally said, "I can't wait for the other books in the series!" I said, "Ha! Caught! You loved it!" He grinned sheepishly and nodded. Kids are so funny.
Next review will be The Darcys and the Bingleys and then I'll be caught up! Unless, of course, I manage to finish reading something else before I write up the review. You know how that goes.
Posted by Bookfool at 9:07 PM