First things first . . . late as always, but at least I remembered (because several of you mentioned it) that it's Banned Books Week. A few banned/challenged books I've read and enjoyed:

A few of those books I actually foisted on my kids because the poor things have always read so fast that I often had to hand them classics to keep both from going stir crazy. Imagine that.

Not good, I'm afraid. I finished three books. Of those three books, I thought one was . . . well, worth banning. Hahaha. Okay, seriously, it had a lot of really graphic sex and it was just gross. Yuck, yuck, yuck. I'm passing it on to a blogger friend for review, since the author sent it to me and I thought she at least deserved her money's worth.

Completed book #2 was An Inconvenient Truth for a New Generation by Al Gore -- the kids' version, in other words. I thought it would be a little more palatable than the real book and I enjoyed it immensely.

Book #3 . . . sigh. It's not bad and I suppose I'll review it, eventually, but it was much like Chameleon Butterfly Dragonfly in a sort of "flaky, New Age" way. Lots of good advice, plenty of chatter that I thought was just a bit too far out there, for me. In this case, the inner critters morph into the "inner Genie" in Awakening the Genie Within by Bettye Johnson. Her religious beliefs clashed rather violently with mine and I kept thinking something was fishy about the spiritual teacher she kept referring to. When I finished reading, I flipped back to log the book's copyright date. Her inspirational teacher's name, it turns out, is a "registered trademark". That's a new one. And, I guess my Fishy Radar is calibrated just fine.

Which brings me to my thought of the day . . . I've obviously been jumping a little too far from my comfort zone, so I'm going to focus on cleansing my mental palate. In order to do so, I'm going to read more books that I know will not offend me or irritate me in a "yuck" or "too flaky" way. Which means more by Bethany House, my new favorite publisher. Fortunately, I have several titles on hand (in fact, I'm reading one -- Mozart's Sister by Nancy Moser). Wahoo for that!

I fell behind on other reading because of the three quick reads I shoved to the head of the queue, this weekend, but I'm also still enjoying Bedlam South. I'm hung up in the middle of Occasional Therapy, though. There's a point I can't get past . . . the reflection on past accomplishments. Uh, what have I accomplished besides child rearing? I can't think of a thing. Not one. It's hard to move on when you're being instructed to reflect on what you've accomplished and you come up totally blank.

And, I'm thinking (again) about returning to numerical ratings because I'm not sure the way I'm currently doing things gives blog readers all of the information they desire. Does it? What do you think? You're my blog readers, after all.

Totally off-the-wall: Bob and Fred and other critters -- We had a big, hairy banana spider living on our porch, for a while. Kiddo named him Bob. After about two weeks, Bob moved away from the porch. "Where's Bob?" we all wondered . . . and then we saw him near the garden hose and decided that was a good thing; Bob would undoubtedly be happier in the jungle. After all, we kept hacking down his anchor lines in order to step off the porch without running into his web.

Bob has moved around quite a bit, but he sticks fairly close to the house, beneath our oak trees. Two days ago, we walked out and another big spider (not quite as large or hairy, but definitely big enough) has moved onto the porch. Kiddo named him Fred. If you hate spiders, you don't want to visit our house, right now. We check to see where they've set up their webs before stepping off the porch, then everyone says, "Morning, Bob. Hey, Fred."

But, wait! This is even better. Some of you know I occasionally have dreams that show up in the headlines, the next day, right? Okay, so last night I dreamed about a gigantic alligator that had to be wrestled, twice, although I can't remember exactly what kind of problem he was causing (probably eating the hurricane food . . . who knows) and the "twice" bit seemed doubly bizarre. I woke up, this morning thinking, "What the heck was that about?" Usually, dreams are a reflection of the subconscious and I can figure out the source, but an alligator? Nope, not something I've seen or thought about even briefly in recent days.

Tonight's paper revealed the truth behind Bookfool's latest psychic dream. The headline: "Gargantuan gators get grabbed up," with a photo of two large alligators and the four hunters who snuffed out their toothful lives. Friday, it says, marked the opening of "the season". I guess that's 'gator hunting season they're referring to. Or, maybe it's hunting season in general? I don't know; I'd rather hunt with my camera.

Speaking of which . . . The kiddo had to take photos with a pinhole camera (made from a can), this weekend, as an assignment for his photography class. My friend Mike, who owns a camera shop, suggested a few good places to shoot black & white photos on Highway 61 South. So, we headed out that way. Kiddo ignored Mike's advice on length of exposure and his didn't turn out well, but I got this really fun self-portrait: 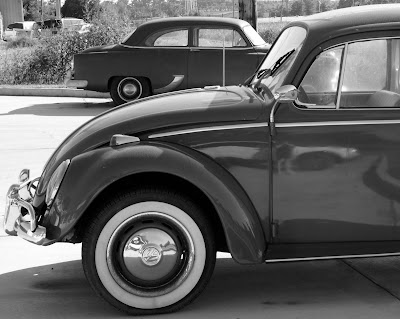 Do you see me?

Okay, enough malarkey for one day. Next up will be my review of The Darcys and the Bingleys by Marsha Altman.

Wait, one more thing for people in the U.S.! Think about the cover of The Hitchhiker's Guide to the Galaxy . . . Don't Panic. Seriously. I learned this in business school . . . Buy low, sell high. Don't pull out your life savings. Put money into the bank, if you can. Ride it out and we'll all be okay. It's panic that caused The Depression. Surely we're too wise for a repeat. I hope so.

I really have to go, now. My cat needs me. You may now return to your regularly scheduled reading. And, have fun, while you're at it!

Bookfool in Still Life with Volkswagen