Talk of the Town by Lisa Wingate 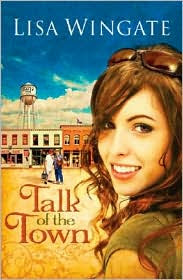 Who knew what could happen to a lone woman here, where it was impossibly dark and there was no one to hear you scream? Ursula probably wouldn't even report me missing. I'd be like one of those people who fall off cruise ships and three days later someone says, Hey, Joe hasn't been sleeping in his bed. Has anyone seen Joe?

"Oh, for heaven's sake, Harlan, you expect us to swallow that?" I said. "It's more likely Brother Ervin's been eating too many of them pickled raisins with his breakfast." Ervin soaks brown raisins in white gin and eats them for medicinal purposes. It's supposed to cure arthritis, so everyone looks the other way, even though Ervin's our Baptist preacher. I don't hold it against him, and God probably don't, either. Being the Baptist preacher in a small town would drive anyone to eat gin-soaked raisins, eventually.

What led you to pick up this book? I read one book by Lisa Wingate, a couple of years ago, and have meant to read more by her. Opportunity knocked; I opened the door and let the book walk in.

Summarize the plot but don't give away the ending. Mandalay Florentino has a decent job as an associate producer for the hit TV show American Megastar and a nasty boss who demands perfection. When she's sent to tiny Daily, Texas, to prepare for gospel singer Amber Anderson's hometown reunion concert -- which must be kept quiet because the top 5 contestants have not yet been announced -- Manda is none too thrilled. News travels like wildfire in tiny Daily and she's stuck sharing a suite with a charming man whom she suspects may be paparazzi. When the "secret" of Amber's top-5 standing appears to be common knowledge in Daily, Manda realizes she has a challenge on her hands. Can she find a way to sneak Amber back into Daily for the concert and keep her job? And, what is she going to do about that gorgeous cowboy she keeps running into?

Imagene Doll is feeling old and tired, unsure life is worth living after the loss of her beloved husband, Jack. When a slick young gal from Hollywood shows up in Daily, Imagene takes to her immediately. And, that young fellow seems just right for her. A little bit of match-making might just be what the doctor ordered. But, the young gal may need even more help than expected.

What did you like most about the book? There is a great deal to love about Talk of the Town. The small-town dynamics, the characters, the humor and understanding of real life, real people and their emotions . . . and the story is just flat fun, but there were times it was so touching that it brought tears to my eyes. I laughed, I cried, I adored this story.

What did you think of the characters? They're wonderful! Imagene calls Mandalay "Amanda Lee" and I think the fact that Manda never corrects her is just one example of what a nice person she is. Everyone bands together nicely, in the way that small-town people often do. They're unique and quirky, but honest. I had a tiny bit of trouble getting used to the two viewpoints; each chapter is told in alternating voice -- first Mandalay, then Imagene, then back to Mandalay, etc. But, by the third chapter, I was comfortable switching viewpoints and the chapters were conveniently labeled with the name of the character from whose point-of-view one was reading. And, they grew on me rapidly. I liked both women and enjoyed reading their thoughts. Amber was a touch too sweet to believe, but she actually didn't appear till near the end of the book, so I didn't choke on the sugar.

Recommended? Highly! I loved this book. Because it's another Bethany House book, there is a Christian element, but again . . . Christianity is just a part of their lives. There isn't any preaching, although there's the occasional moment of musing about God and how He figures into things, but that could show up in any Southern novel. The book is not overtly Christian; it's just a fun bit of Southern fiction with some funny characters. Talk of the Town would be an excellent book for the Southern Reading Challenge, next time around. It is apparently the beginning of a series, so I'm really looking forward to seeing what else Lisa Wingate has up her sleeve.

Cover thoughts: Bethany House does is, again! I think their covers are wonderful. The character on the right side of the cover looks very much like the description of Mandalay. The little town of Daily is nicely illustrated. And, the two old ladies are a hoot -- there are plenty of women who fit their description, but Imagene and her best friend are probably the two women the artist intended to show gossiping. Perfect!

Coming up: August reads in review

Currently reading:
The Words of War by Donagh Bracken (I will finish this book soon, oh yes I will)
The Last Queen by C. W. Gortner
Eleanor Rigby by Douglas Coupland

Books spotted in other folks' hands, whilst on the plane and in the airport:
A John Grisham
A Daniel Silva
The World is Flat by Thomas Friedman
Buddha Takes No Prisoners (about meditation; didn't catch the author's name)

Oddly, the man who was reading a book on meditation left a space between his wife's seat (by the window) and his seat on the aisle; he was hoping they wouldn't have to share their set of three seats on our Southwest flight and proclaimed victory when nobody asked him to move over. We shared our third seat and ended up with a sweet, chatty woman who was heading out to celebrate her 30th birthday without the kids. I personally believe we were the winners in that deal. We had a fun time chatting with our seat-mate.

I just spent an hour trying to rescue my son from the school hallway. Apparently one tornado warning has blended into another. Meanwhile, we have water from Gustav's downpours backing up outside our house. We've been flooded several times and I'm irritated because the husband simply will not fix the drainage mess he made. I tried bailing, but it didn't work so I'm waiting for (deeply in trouble) spouse to come home and we'll go look for a pump. Gah. I hate tropical hurricany stormy depression rains. And, we need cat litter. You can only wait so long to fetch fresh litter, once it runs out. Calgon, take me away.

Off to tiptoe through the puddles,

Bookfool, sloshy and tired of rain and not very wahooey
Posted by Bookfool at 9:59 PM