We are all fine here, albeit a bit soggy and very opinionated 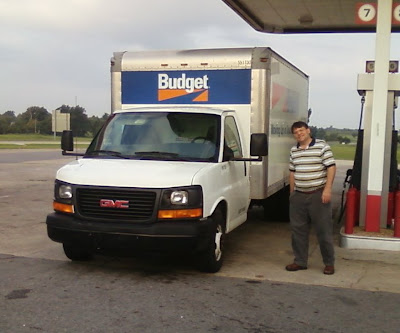 We're all soggy but fine, here! Kiddo is home from school, today, due to power outages in the area and it's pouring outside because we ended up on the east side of Gustav (the torrential rain side -- yucky). But, the storm has not been bad, relatively speaking -- just buckets and buckets of rain and a bit gusty, at times. Our power has flickered, but not gone out at all in our neighborhood, which is extremely unusual and something for which we are all grateful. I curled up and read, slept, read some more and just had a relaxing day, yesterday. It's still raining heavily and gusting on occasion -- probably will be for another day and then should begin to clear.

Thanks to all who sent thoughts, wishes and prayers that Gustav would fizzle and turn sharply. The storm held off until we had unloaded the rental truck and sent our eldest off with a couch, yesterday morning. All worked out perfectly! That's hubby with the Budget rental truck, at our first stop in Oklahoma, above. I drove all but the first half-hour or so, thinking that the husband needed to save his strength for unloading.

The drive was quite comfy. Around Lake Village, Arkansas, we began to pass some pretty heavy refugee traffic from Gustav. I found last night's wholly negative news coverage of a few angry, sobbing evacuees really frustrating. Southerners tend to be tough and resourceful and we saw mostly happy families driving past, some tossing balls in hotel parking lots, a few packed campsites full of RVs and trailers. Yesterday, we went to the local mall. Usually not a happening place, it was buzzing with activity and people seemed relaxed. The real news is apparently not good enough. I was kind of stunned to see Katie Couric standing in New Orleans (which didn't receive the worst of the storm) looking, frankly, bored out of her mind. This reminded me, of course, of why I stopped watching the news in the first place. It's not truth; it's slanted -- as it has been for over 100 years (the topic, in fact, of the Civil War book I'm reading: The Words of War).

Here's what it's been like at our house, although we're not quite so pixilated (but that hanging plant really is quite dead and the sound seems to be pretty good) -- this is my first attempt at using the video feature on my new phone and was taken a few hours ago:


I finished Talk of the Town by Lisa Wingate, yesterday. Review forthcoming, along with an August wrap-up. This weekend I zipped through Did I Expect Angels? by Kathryn Maughan. I'll be reviewing the latter for a book tour; I'm going to post-date the review so that it will appear around the 14th of the month. Both books were quick reads -- of totally different character but equally engrossing. I didn't read any of The Words of War, this weekend, because it requires too much concentration and I thought the atlas of battles was a bit too heavy to take on a plane, but really . . . if I don't finish it this week, there's just something wrong with me. It's a great book.

My sidebar is stuck, again, so pardon its outdatedness.

I double-checked the batteries on our flashlights before the storm hit. Darned if I didn't let the batteries in one of my Maglites corrode. Crud. There's one for the Christmas wish list. Seriously, I got that Maglite for Christmas. I am so bummed.

Yesterday was my birthday and I asked my husband to please just buy me a birthday cupcake. He's so funny. He was determined to get me that cupcake, come rain or shine. We eventually piled into the car and he said, "Stay here," then trudged into Kroger and bought a 6-pack of colorfully frosted cupcakes. I ate the purple-frosted one and planned to save the green-frosted cupcake for later because it looked just a bit too much like Oobleck and I had to give that green stuff some thought (purple and green being my favorite colors, I bypassed the pink, blue, orange and yellow). Fortunately, the kiddo saved me by eating it before I made it back to the kitchen. Boys are so useful.

Off to curl up and read, some more. Sounds like the rain is letting up a bit. Wahoo!