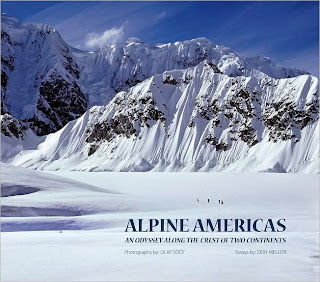 In faraway cities, gridded by patterns rectangular and unnatural, there are people with pencils who concern themselves with measuring mountains. Up in the Brooks Range, however, the cities are too far away. The ticking of clocks and the beeping of phones are replaced by a remarkable quiet as the oblique summer light filters into soft pastels. With the rest of the world so brutally quantified, it's nice to be in such a place whose components don't wear fixed numeric labels. It's enough work to keep the mosquitoes out of your pot when you lift the lid to see if the noodles have boiled.

appears to be what one traditionally would refer to as a "coffee table" book -- heavy on photos, bought by most folks for the sake of setting it out on a table where people can flip through it whilst drinking coffee and admire the photos without really thinking. And, yes, you could set it out on your table and people will sigh at the awesome photography. But, stop right there. This is not a book meant to be idly dismissed as just another photo book to set on the table. Alpine Americas is for reading and savoring not only the beautiful panoramas, but also the stunningly crafted and sometimes very opinionated text.

The photos, taken by Olaf Sööt over a 40-year stretch of exploration and discovery on the North and South American continents is, according to publicity material, "a mountaineer's tour of the 10,000-mile range of peaks from the Arctic to Patagonia through the lens of renowned outdoor photographer Olaf Sööt and in the words of writer and climber Don Mellor".

What is a "mountaineer's tour", exactly? It's photography taken in places that not just anyone is willing or able to travel, along with descriptions of geography and history along the mountain ranges in this lengthy stretch, how one arrives at certain peaks, what kind of climbing challenge a mountaineer will find, how it feels to walk or climb certain stretches of the earth's stunning topography and what it's like to face the dangers of falling into a crevasse or facing a mountain that tends to crumble beneath your fingertips. It's a book that is crammed with the senses, written with a philosophical bent and a poetic beauty. It's also got some really terrific stories that you'll find yourself repeating to the nearest willing listener.

In 1916, the same summer that roped climbing began in the United States, Austrian guide Conrad Kain was for a moment stymied by a fifty-poot pinnacle blocking the way along the ridge of unclimbed Bugaboo Spire. Outfitted in the manner of the day -- nailed boots, long alpenstock, a feeble hemp rope -- he didn't see any way around. The drop off either side of the ridge was huge. He took his rudimentary ice axe and hooked it on the rock, pulling himself up just high enough to reach a hold in the crack above, while his nailed boot soles scraped against hard granite. Gadgets and guts.

I still think climbers have to be a little bit on the crazy side, but after reading this book I suddenly feel like I "get it", why they risk their lives to conquer a peak. Here's one quote (a photo caption) that gives you an idea:

The highest peaks in North America describe an arc across southern Alaska and down the western coast of Canada. This is a land of scale, where huge mountains wear thick cloaks of snow and ice. Climbing here is both arduous and dangerous -- and that's the allure that finds this climbing team making its way up the Kahiltna Glacier under Mount Hunter's west ridge toward Denali, in search of the joy of feeling so small in a world so grand.

Ah. That, I understand. And, this made me laugh:

In the Arctic kind of cold, a rubber band doesn't want to retract when stretched. It just stays all out of shape until things warm up. In such cold, a camper's foam sleeping pad stiffens and cracks and breaks into a hundred pieces, and it's no fun trying to arrange all those little synthetic taco chips into a mat to keep the body off the snow.

I had that problem when I left a foam rubber pillow in my car during freezing weather, while I was in Oklahoma during the Christmas of 2007. "Synthetic taco chips" is right. Not the kind of thing a princess easily disturbed by little peas under a stack of mattresses can tolerate. But, these guys are tough.

Alpine Americas is the first book that has given me a real sense of why climbers take risks. And, the photos are, of course, spectacular. Definitely a book worth putting out on your coffee table, but it's also a great way to read and learn a little bit more about our Earth and the small group of people who are willing to hike into territory where whiskers freeze and block walls must be built from snow to protect a campsite.

If you've read this book and would like me to link to your review, let me know!

Not sure. I'm currently juggling the usual number of books -- four or five, maybe six. I just added the latest to my sidebar and, yep, looks like six. Last night I was sitting in our plush leather chair in the room I like to call the "reading room" (hubby refers to it as "my office and get out of my chair"). I didn't have one of my current reads handy because I'm always getting kicked out of that room before I manage to settle in and read, but dear huzzybuns was away for a time. There are books everywhere in the reading room, and I do mean everywhere. An entire wall is dedicated to shelves and cabinets, and then there's this other wall with a dresser that's actually stuffed full of books and topped with a couple of crate-type shelves full of them. I'll have to take a photo, sometime when we've cleaned it out a bit.

My eyes settled on The Feast of Love by Charles Baxter. It's one of those books that I've owned for several years and occasionally look at longingly or move from shelf to shelf, but hadn't ever bothered to open it. And, I can just tell you right now that it is one of the most perfectly-crafted novels I've read in a long time. I'm only on about page 80 out of around 340, but Mr. Baxter is totally blowing me away. Expect a gushy review of that one in less than a week. I can imagine long stretches of sneaked-in reading time with the cat, for the next few days.

On the home front, I think I mentioned that the husband and I joined a program called Marathon Makeover, right? It's a program that was begun by a couple in Mississippi and is slowly spreading. Their slogan is, "Turning couch potatoes into marathoners!" They've got everything all nicely scheduled and we'll allegedly be able to run a half-marathon by June, a full marathon by the date of the Chicago Marathon (although the group is hosting its own marathon in Jackson, this year, instead of flying to Chicago). They have their own "blog" site, but it's more of a forum than a blog and being a veteran blogger . . . of course, that's just not good enough. So I started a blog called Runfoolery and there you can follow our journey to running a marathon if you're interested. The first entry is dull as paste, but I hope it won't be all boring. I'll tell stories about our experiences and chatter about how it's going.

Apologies for what may seem to some like my disappearance from the blogging world. I'm still learning how to fit in the exercise time in between fixing up various bits of the house (today, we're working on putting cabinets in the utility room -- which is just a horrendous mess -- because one of the pantry shelves collapsed), reading, reviewing, responding to emails, being a wife and mother. How do you working people fit in all that has to be done? I'm doing my best to keep up with other blogs, but sometimes I don't even open the reader for a couple of days. I'll keep trying. I fell behind a bit on my Bible reading, but I'm close to being caught up and have been reminded that the entire tale of Joseph is one of my favorite Bible stories. What a great attitude he had!

I'm off to see if I can reach my dryer to pull out the clothing I loaded last night. Don't forget, I'm doing a drawing for three Young Adult books, tomorrow. You still have time to sign up here.

Bookfool, still a little unbalanced but working on it