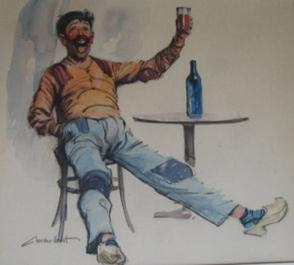 Wow, that was the most fun I've ever had doing a drawing!!! The winner of the Box of Oh How I Love You is:

Marta
I'll email you for your address, Marta. Congratulations!
And, what shall we do with the drunken sailor? Here are all of the answers:
--Let the drunken sailor stumble around for a bit and wait for his funny remarks to become offensive before I'd have him escorted to the ship to sleep it off.
--Tie him to the mast, Cap'n, way up high!
--Put the Drunken Sailor on the next ice breaker departing for Antarctica and hopefully I would not see him again for a while.
--Make him sing the other 60-whatever verses of the song and then send him on his way.
-- I like the 'Make him kiss the gardeners daughter', as for me I will keep him submerged in the water until he comes to his senses. I am strict that way!!!
-- Strip him naked and leave him in the town center. :)
-- Have him empty the poo pot and any that spilt over he would have to clean up.
-- We shall tie him up and throw him overboard!
-- Give him more alcohol. There is nothing more depressing than a hungover formerly -- drunken sailor. That would just be messy.
-- Let's shave his head and paint it red!
-- Join him for another drink and another and another till neither one of you feels any pain
-- What do you do with a drunken sailor? Fix him up with an ugly jailer.
-- Have him organize my room since it's a mess after I come home from my xmas holiday. And after that I can give him another drink for being such a good sport ;)
-- Throw that sailor in the hold with all of our unfinished books.
-- Bring him to school for show and tell about why not to drink why sailing :-)
-- Steal his watch and roll him in a ditch! Maybe even take his wallet. He'll never know. :P
-- Shave his belly with a rusty razor...ask where he got the drinks and toss him to the fish for hogging all the liquor.
-- Can we put the drunken sailor in a dress and make him walk down main street singing Christmas carols?
-- Tie him up and keep him in the closet til he sobers up....and then....who knows what I'll think of next....maybe something involving more knots ;)
-- Ask him to shiver me timbers and cast off. Better yet, how about an introduction to his Captain Jack Sparrow, hmm?
-- Put the sailor in the brig and let him sleep it off.
You guys are funny! Thanks to all for participating! I have to organize a wee bit and I'll be back with my next drawing, tomorrow. Happy Sunday!
Bookfool with Rootbeer (that's about as strong as a Bookfool is willing to go)
Posted by Bookfool at 7:50 PM

Email ThisBlogThis!Share to TwitterShare to FacebookShare to Pinterest
Labels: Drawing