I Choose to be Happy by Missy Jenkins 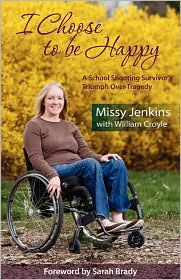 I Choose to be Happy

is the true story of how one school-shooting victim has dealt with the life-changing aftermath of being shot and paralyzed from the chest down. Missy Jenkins was standing in a prayer circle in West Paducah, Kentucky's Heath High School lobby when fellow student Michael Carneal walked into the lobby and began shooting at random in December of 1997. Three girls were killed and five more students injured. Of those injuries, Missy's was the worst and her recovery involved many months of healing and physical therapy.

Missy takes the reader right to the scene -- from the time she left home, totally oblivious to how her life was about to change, through her difficult recovery and grueling therapy, all the way up to the birth of her first child. She describes how she quickly forgave her attacker and how she has stayed positive in spite of major life changes that will never go away. Of particular interest is the fact that Missy says everything she has done and become has resulted because of her injury. She describes her life in the spotlight and how she overcame her natural shyness because she felt her story needed to be shared.

Because she's a Christian and she relied on her faith to get her through difficult times, I Choose to be Happy does have a definite Christian perspective. It was her faith that Missy says allowed her to forgive Michael quickly and -- although she still puzzles over what caused him to shoot his fellow students and is very concerned that his attempt to get his case retried could end up in the release of a disturbed man -- she has a surprisingly gentle way of viewing her attacker. Missy even describes how much she admired him before the day of the shooting.

I didn't find that the author tried to convert anyone or force her opinion on them; her Christianity is simply a part of who she is, though, and she does talk about how she came to be a Christian and how it influenced her decisions and actions, including the refusal to join in on a lawsuit against Michael's family. The book is a quick read and not easy. You are so firmly planted in her shoes that you can't help but wipe away tears when you read about the graphic details of the shooting and the difficulty each of the students and families had in dealing with their losses. In that way, it's a gut-wrenching read; but, at the same time amazing to read how Missy turned her tragedy into opportunity and has used her experience to help others.

Highly recommended and I found the book gripping, but be prepared for the inside look into life as a paraplegic. It's not pretty and occasionally I almost felt like saying, "Too much information!" However, I think when Missy describes the details of something like her bathroom routine, she does so with a purpose -- to help people understand the true impact a few moments of violence can have on one person's entire lifetime.

Here's another review. If you've written a review of this book and would like me to link up, let me know:

I'm trying to decide which giveaway box to plunk my review copy of this book into -- Drama in Real Life? Christian? What do you think? Either way, I'll pass this copy on, sometime soon!

A review of We're In This Boat Together by Camille Bishop, followed by a review of A Civil General by Stinebeck & Gill.

Daylight Runner by Oisin McGann, a futuristic, dystopian Young Adult novel about a boy who lives in a domed city during the next ice age. I fell asleep after reading 72 pages of this one and had the coolest dystopian nightmare. We had to move into strange new lodgings in which the refrigerator/kitchen area were next to our stored items and the living quarters and dining were completely separate. So, we had to walk outside of the living quarters to get to our refrigerator in order to cook and eat. But, it wasn't a big deal because there wasn't much food available. Best parts: The kitchen was smaller and much, much older and uglier than ours. I woke up feeling good about my horrid little kitchen. Also, the living area had a large, funky wall hanging made of beads that was absolutely stunning and also contained some large, antique carved furnishings (nothing to sit on -- just cabinets). 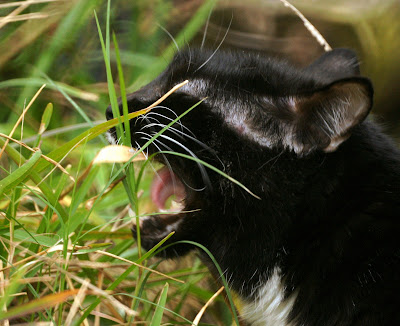