Grace for the Afflicted by Matthew S. Stanford, PhD 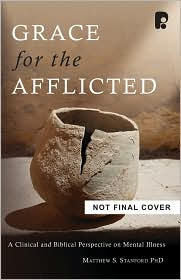 A fifth and final reason I believe Christians tend to deny the legitimacy of mental disorders is they are concerned that the designation "mental illness" is simply another tool the world uses to dismiss or legitimize sinful behavior. Although I believe this is a legitimate concern, we need to be careful to separate sin from illness. It is not a sin to be ill, even mentally ill. On the other hand, mental illness, whether it is a learned pattern of abnormal thinking or a biological disorder, does not dismiss sinful behavior (Leviticus 5:17).

I've described this book a little in past posts, but in brief: Grace for the Afflicted is a book that describes some common mental illnesses, their causes and management, and what the Bible has to say about them. It's written by a psychologist who teaches at Baylor and does research on the brain.

There are loads of scripture references and the descriptions of each illness and its treatment are written with a great deal of compassion but with emphasis on the fact that mental illness is not an excuse for making conscious decisions to do wrong. He gives examples of how the various conditions have effected people and, if applicable, describes passages from the Bible in which a specific mental illness can be surmised from the descriptions of Biblical characters. The author also goes into detail about the body-mind-spirit connection, which is one thing that's a little bit beyond my descriptive abilities but absolutely fascinating.

What I loved about this book:

Just about everything. The author describes the use of medication -- when it's needed, when it's not and why some people absolutely must use medication. They may need prayer, as well, but what mentally ill people need more than anything is emotional support of their fellow Christians and help with basic needs during crisis. He suggests making meals, performing simple chores, helping pay the bills and such -- the same kind of little things that most church members are happy to provide after surgery, childbirth or a funeral -- for times that a mentally ill person is having trouble functioning.

As I was reading I thought, "This is one of those rare, special books that I think absolutely every Christian should read." In fact, I'll probably buy a handful and pass them out. I love the way the author describes the difference between demon possession (which a lot of people like to assume causes mental illness) and true illness. He says possession happens, but it's rare and gives evidence of how few actual possessions are described in the Bible. We tend to zone in on tales like the story of Legion, the demon who was (were?) chased out of a man and into the pigs nearby -- remember, the pigs that went running straight into the water and drowned? Which, by the way, is a perfect example of why the Bible is such fun reading material.

Another thing you cannot help but get out of this book is the fact that absolutely everybody is touched by mental illness, at some point. We all have acquaintances or relatives who battle addiction, depression and other problems. And, for that reason alone, it's important for every church member to understand why such things shouldn't be whispered about but faced head-on and treated in whatever way is most appropriate.

The only thing I disliked about this book

was that the parts on the body-mind-spirit connection were a tiny bit dry. Just a tiny bit -- it was still utterly fascinating. That is the beginning section of the book (you can read the first chapter, here). It would be tempting to skim that bit but it's important as it lays the groundwork for understanding of the Biblical perspective on mental illness.

, whether you're related to someone with mental illness or just want to read up so you know how best to support mentally ill people within your church.

Tomorrow, I will be touring No Experts Needed, so my Written in Blood review will be delayed by a day. This has been one of those weeks in which I've sat down a few times and just stared at the screen, totally blank. So, I have a bit of catch-up to do. If I can ever sit still long enough, I'll churn out a few posts in one day and clog your reader. Won't that be fun?

Son and I went to the Mexican restaurant, tonight, so you get a picture of artwork painted directly onto the wall. They have some pretty talented people working in that restaurant. 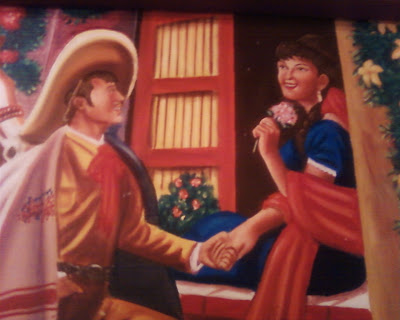